So, yes, the title is evidence that I have jumped on the proverbial band wagon and now count myself among the Nights Watch or whatever GoT fans call themselves. Starkers? Ned-Heads? Either way, expect some fan-art of a wolfy persuasion, soon.

Oh BOY! A post! Let's see what I have been up to in the last months of winter and the reluctant first weeks of spring... 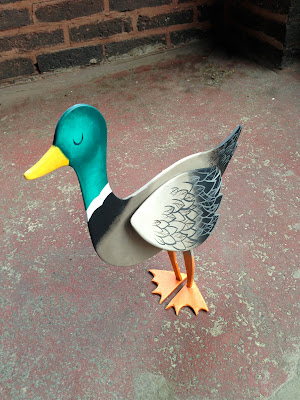 Well, i guess reluctant is the word for this first project, or maybe just delayed, as I was genuinely excited to make a 3-D duck sculpture (one of my favorite animals and a beloved childhood pet). This mallard here was a commission from a good guy in Des Moines, who I met over the Thanksgiving holiday at Market Day. The duck was fun to cut, okay to sand, a joy to paint, and a pickle to assemble. In the end a foot broke off in shipping, but by all reports he reattached it without any drama. 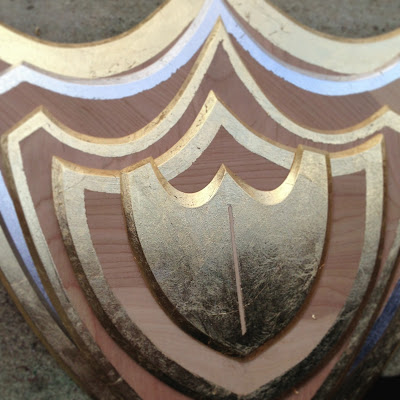 I then started production on new plaques and animal heads. This photo looks pretty, so I am sharing it. Metal leafing is one of the more random skills I've picked up over the years, but I'm happy to put it to use. 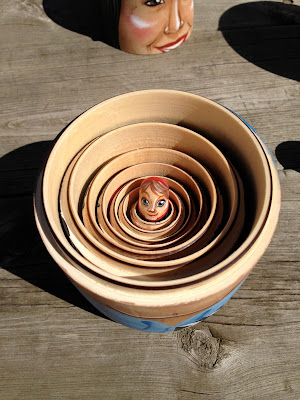 Next came a rush order on a set of nesting dolls from a dear friend, for her fathers birthday. The tricky part was finding a set of eight dolls (that's as low as she could get the family, even with spouses painted back-to-back on a shared doll). I found a set of ten on ebay and ditched the smallest (about a centimeter tall, no joke) and side-lining the largest (a 12" monstrosity) for a future project. 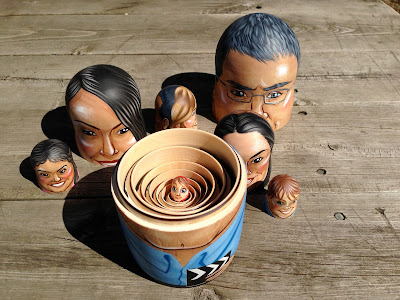 The quality of the wood was better than the dolls I regularly use, but hard to draw on without denting - it was soft birch, I think. Shipping was funny, as I had to charge the client an inflated fee for quick delivery, only to find after they came (one day turn-around!?) that they shipped from Chicago, about two miles from my door. Lesson learned: Always read both shipping addresses! 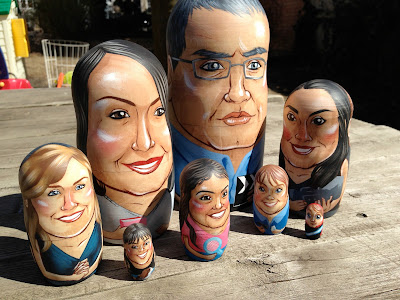 In the end, papa was reported to have said that they were the best gift he had ever received. That's what I aim for. 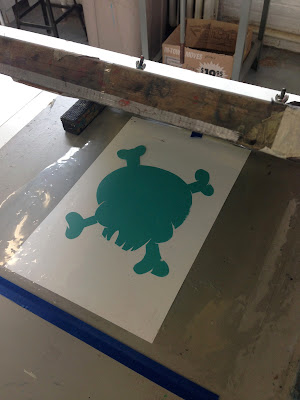 Next I started a screen printing class at Lill Street Art Center, which I highly recommend for all of your art-centering needs. What an amazing place. I wish I had started there years ago, as our time in Chicago is waning (more on that later). This was my first screen, which we made by cutting a vague shape out of paper and masking the screen. 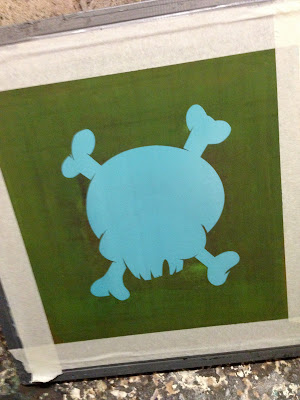 I annoyed the teacher by going too complex with what was supposed to be a simple shape, with no great amount of detail, but it was only a five week class and I wanted to make something I could be proud of! 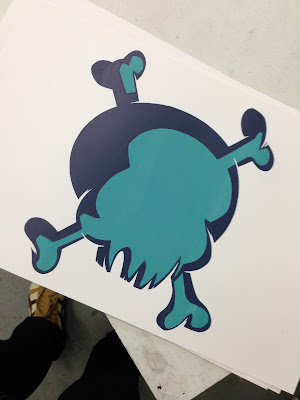 The next layer used the same stencil, but augmented it with contact paper (blocking a stripe or portion of the stencil). 'Not too much detail,' said the teacher. Again, Ben no listen, and I aaalmost got my just desserts, but managed to pull it off (pun!) after much sweating and blushing. 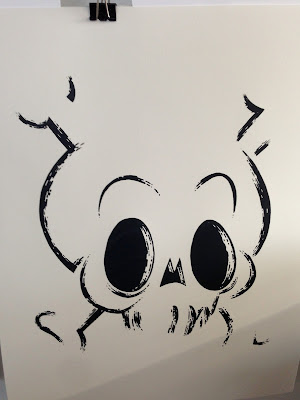 Layer three is where the detail is supposed to come in, as we were able to actually draw the third image. Listen to your teacher, kids! I'm a bad example, working against my own kind. This is the third layer on its own, which started as a test, but I liked it, so I made three. 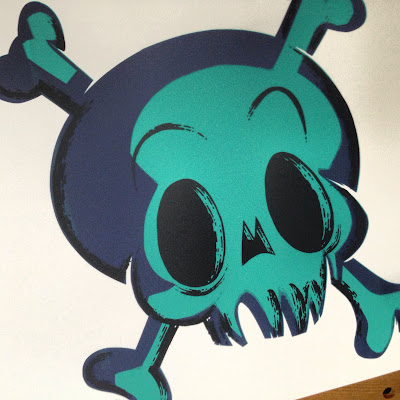 All together, now! I like it, it's neat, and screen printing is the coolest. I'm in my second session now and getting to do a lot more with it. Like this! 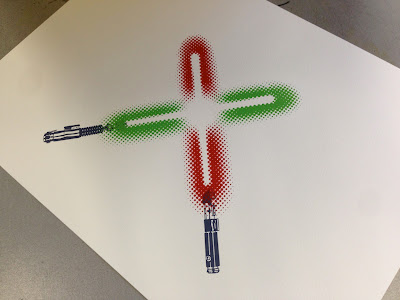 *Shoom, shoom, XCK!* Yep, first chance I had to do something of my own design, start to finish, I went nerdy. I can't help it, I have a problem... If you, too, suffer from nerd-itis, I've got about fifteen of these Return of the Jedi themed prints, which I'll try to post soon in the shop. 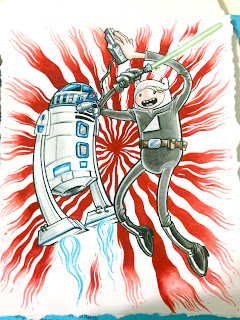 Lastly, this little commission came through, another from Des Moines, I love me some Iowanites! Adventure Time/Star Wars mashup, she says, and I take the job, no question on that one. I loved how it turned out, so did the client, and everybody wins! More screen printing news to come. Next up is a certain winged rodent, the fellow with pointy ears and a grumpy disposition... until then, thanks for reading, and e-mail me at benrum@gmail.com with any questions!
Posted by benrum at 8:40 AM No comments: