It's been a few weeks since I was able to post any new work, so I thought I would take this opportunity (so many opportunites reveal themselves at 2 am) to catch you up on what has been happening in the Arts du Rumback. Sorry, that's supposed to be a French joke, but I have no French to speak of. 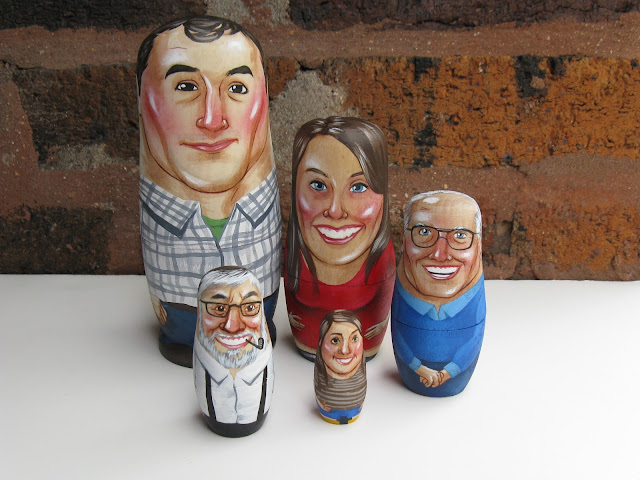 In March I took an e-mail through etsy inquiring about my policy on international shipping and the time-frame needed to complete a set of nesting dolls. It was from a lovely and complimentary Glasgaunder (new word!) named Katie. She was engaged to a handsom fellow named Nico (both pictured here through the cartoon-filter), who had proposed to her with a set of nesting dolls. Let's all say it together: Awwwwww! 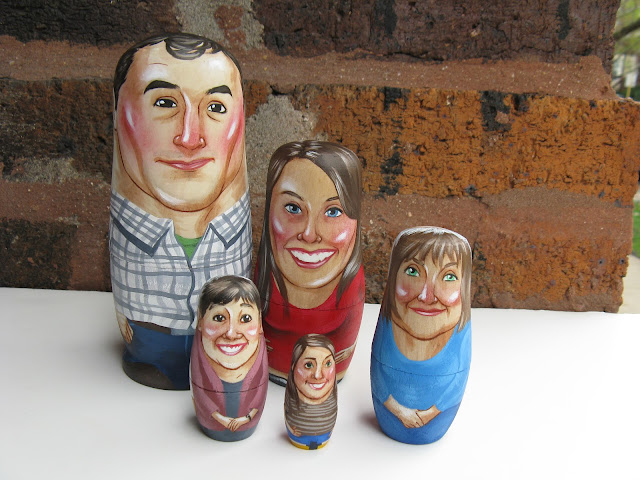 She thought it only appropriate, and I must say, I agreed, that their wedding cake topper avatars be in the same form, in the style of Russian nesting dolls of olde. As it turns out (here I thumb snap my suspenders and smile a saucy grin), I'm the closest thing to a Russian craftsman between Glasgau and Chicago! I was happy to take the job, and made my best set yet. 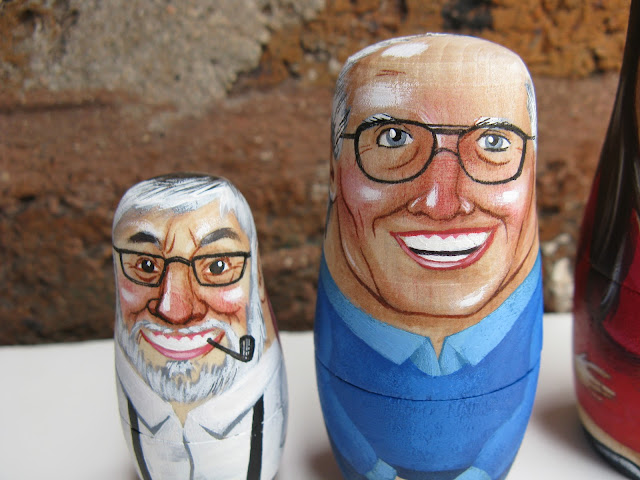 The dads! I was absolutely charmed by the e-mail exchanges between Katie and I, and loved her guidance offered on the cothing. "Dad ALWAYS wears a navy round-neck jumper, pale blue collared shirt and blue jeans... That's when he's not in his cycling kit!" I had to lean on my Harry Potter lingo a bit t decipher things like jumper (pull-over sweater) and trainers (sneaks, kicks). I had to google her future-father-in-law's outfit detail though, as I had never heard suspenders reffered to as braces. 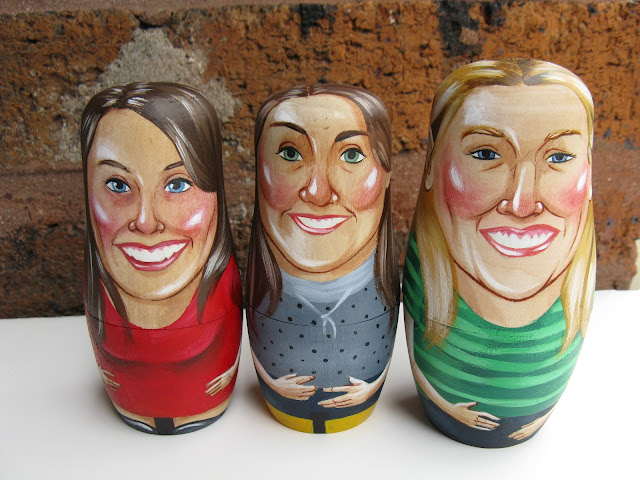 She asked for two extra 'second' dolls to give to her bridesmaids, her sister and a friend. Notice the yellow wellies with navy shorts on the sis - these were very precisely noted details. 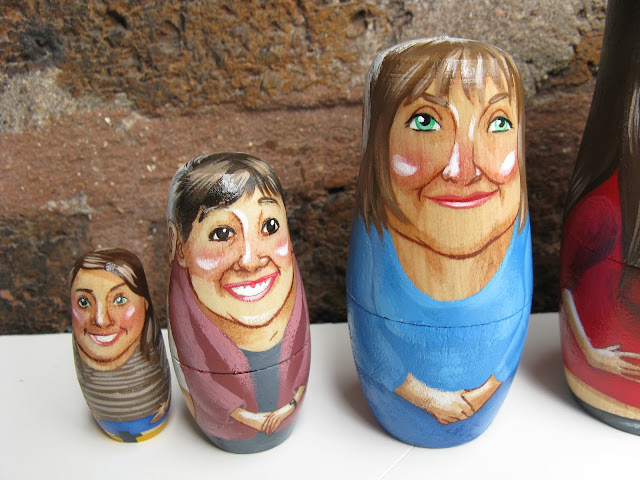 Incidently, sis got to be painted twice - once in the complete set, and once in the add-on brdesmaid gift. Here are the mums and the sister. Look closely at the edge of each mum and you'll be able to guess how I fit seven family members on five dolls. 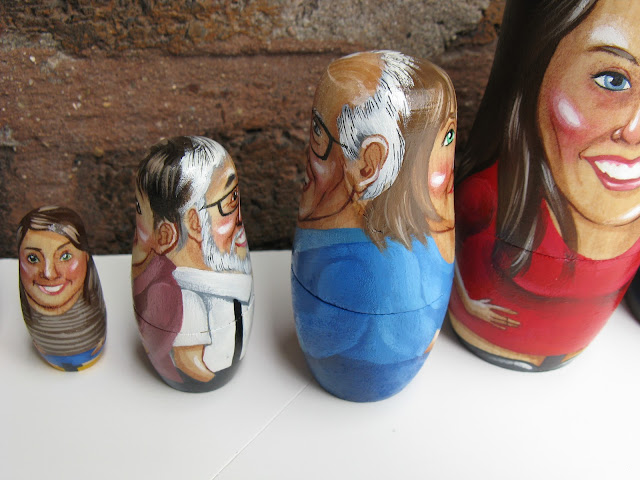 That's right, double-sided parents! That sounds like a sixties horror movie that never was. Yes, by the power of illustrative representation (and a lack of space) each of the parent pairs are represented back-to-back. I was pleased with the outcome, and thought it a fun and functional detail, as so many of the back-sides of these dolls are just butts and wasted space. 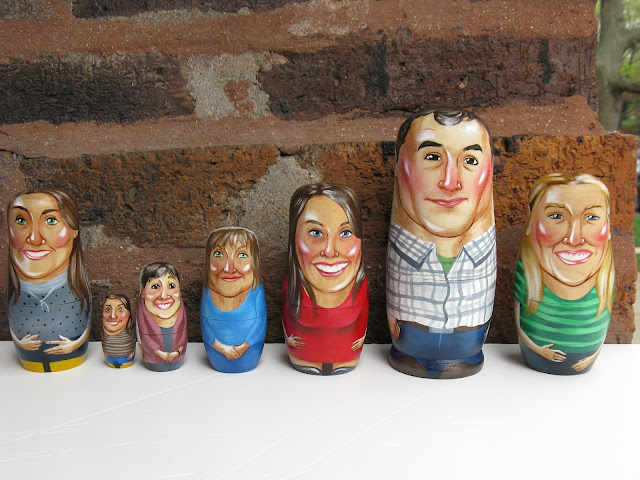 Here they are,one big happy family, soon to be joined by marraige and bound for life! Good luck, Katie and Nico! Many happy years await you. 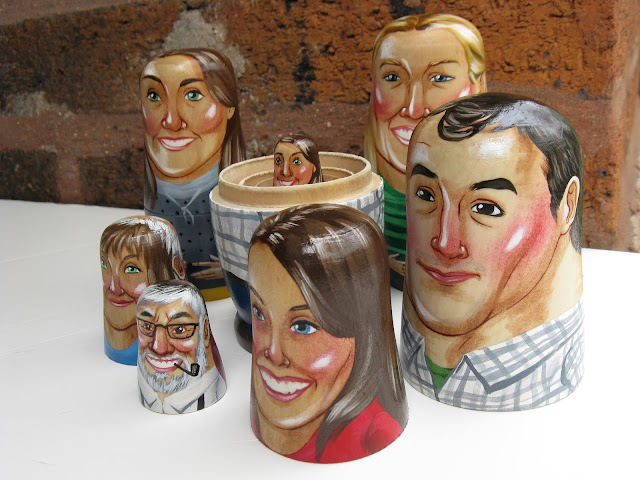 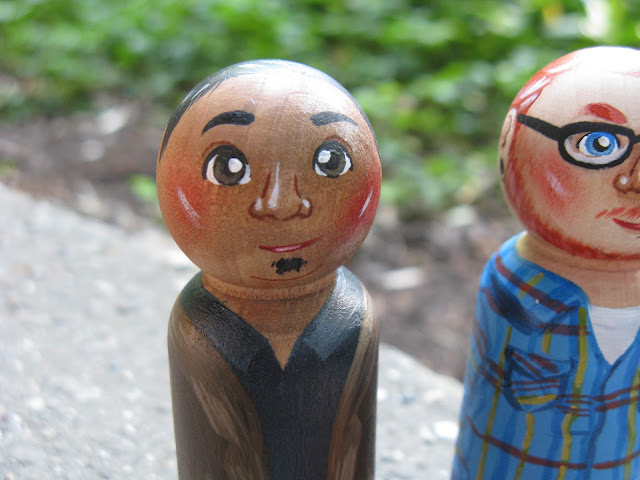 The next job on the list was this trio of peg people, ordered bythe magic of IRL (off-line) social networking! My friend Joel has a friend named Doug who I only knew through Twitter (okay, a little online). Doug and I met after years of digital acquaintance at C2E2, in April. Doug took my card, and gave it to Dustin (the bespecticaled fellow pictured here), who e-mailed me (okay, fine, the internet is an integral part of our everyday blah, blah, blah), and asked after peg people for a birthday gift. 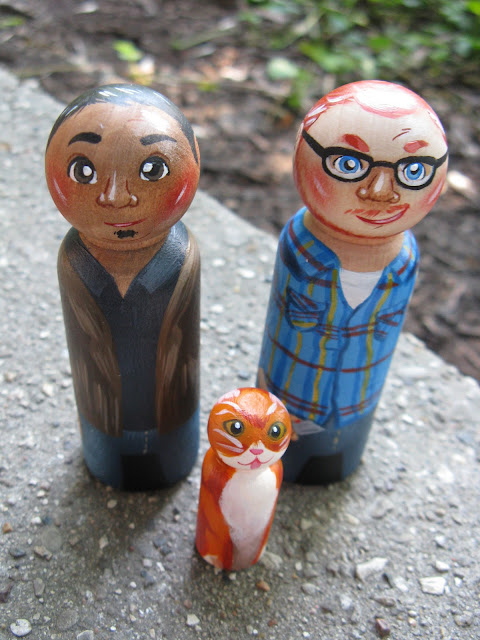 Here they are! Actually, there they are, my postal tracking app tells me they've safely made it to Kansas, and are on the verge of being delivered. Look at that kitty! Too cute! 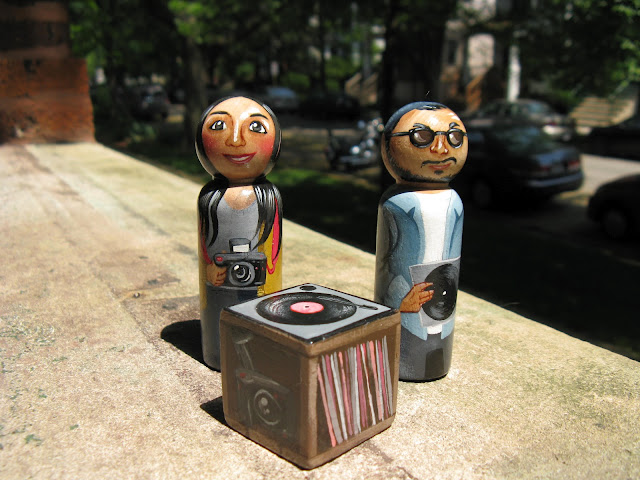 Then! (Garth Algar style) Then, I was finishing those guys up at naptime at preschool, and one of the parents saw them on a shelf and asked after them. These very hip and cool pegs you see here are the product of a LONG stint at my desk Friday. I finished them up bringht and early Saturday, and they were out the door, on their way to the doll-i-fied couple. He is a DJ and she a Photographer, so the client asked if I could come up with something dirivitive of their interests in lieu of a pet or family member. Boom! Crate of records and camera gear. Done, and done.

There! Three deadlines met, and two more to get started on. As always, e-mail me with any inquiries. I keep busy, but there is almost always room for one more!

Posted by benrum at 3:21 PM No comments:

The Fourth Will Be With You, Always.

Hey nerds, it's STAR WARS DAY! Put on your metal bikini's and fire up those DVD players!

Tangent: I do not own any part of the trilogy on Blu-ray; I only watch the episodes released before my pubescence, and only watch the original theatrical cuts, which are only available on DVD. End tangent.

I'm coming off as hypocritical, I fear, by whooping it up over here - my TV is off and cool to the touch. I do think this warrants getting a copy of Star Wars Kinect and hanging out at Josh's house whether he likes it or not. I'm a PS3 man, myself, and the only game I have is The Force Unleashed II, which isn't very high on the re-play-ability list. Oh, wait! I DO have the original soundtrack on vinyl! Vintage-hipster-nerd-party!

I'm off point. I wanted to post really quick and do a Star Wars Day sale, right here on the old blog. I have a handful of Star Wars themed artworks and prints available, and thought it may be a good idea to offer a discount, in respect of the holiday.

Here are the deals, and we'll leave Etsy out of this one. The prints come matted and bagged, ready to drop into a frame. The original artwork is shipped in frame, as you see it. 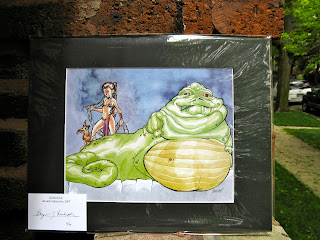 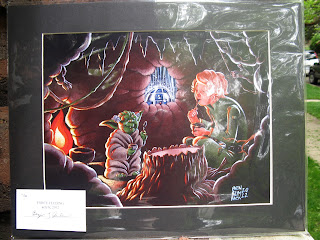 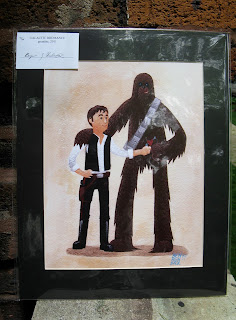 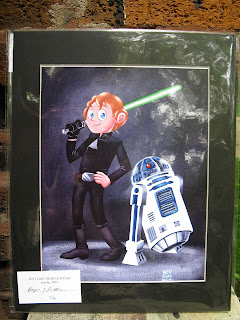 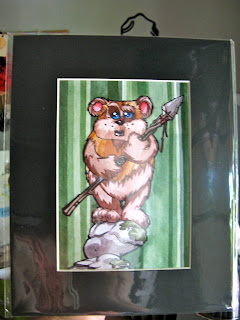 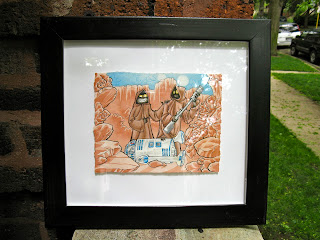 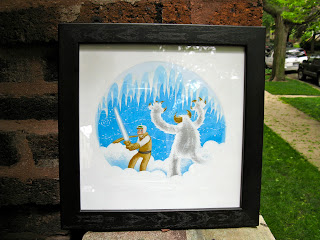 Multiple prints are available, but the originals are, obviously, one of a kind. $4 shipping on prints, $8 on framed original artwork.

Thanks for reading, and may the force be with you!