I was in a coma or something

Hey Reader! I can't believe that I haven't posted in so long. It wasn't laziness that kept me away for so many long months... I was dead... but, I got better. Okay, fine, that's a damn lie, and I admit it. In the time since I last posted, I have become a husband, and done a lot of other stuff that kept me from blogging. Namely, I played a lot of video games, made some art, and continued to sculpt the young minds of greater Chicago. Here's some of what happened!

In October, Hallowe'en becomes my main focus (even with a wedding 46 days away). This was may way-awesome costume this year. I was Bender, again (it happened in 2005 as well, but this was a far superior outing). 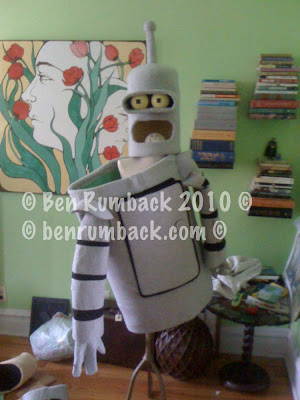 Good ol' Mary was the amazing and diabolical Dr. Horrible, and Audrie wore my Dino costume from last year. Martha went as Phillip J Frye (making us the awesome-est couple ever), but I can't find the picture! I'll dig it up and post it, soon! 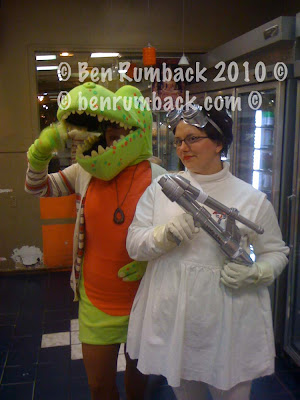 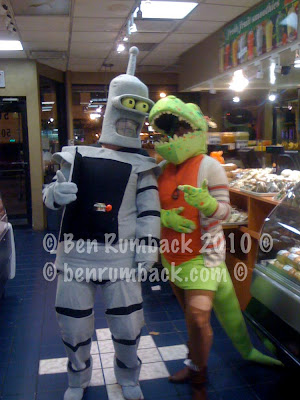 ... And THEN, I got to marry THIS beautiful, charming, amazing woman. I shrug a COSMIC shrug in explanation... I think she just likes to laugh. I lucked out, for whatever reason. Amazing. 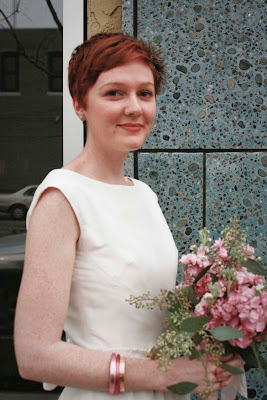 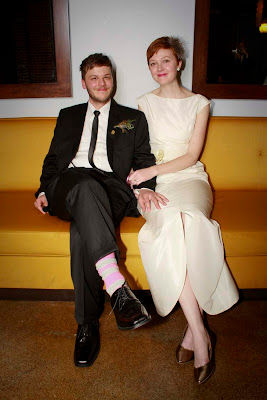 Sniffles and tears aside, life went on a week after the nuptials, and little had changed. Martha went back to school, and I started getting my annual Christmas projects. Here are the commissions. 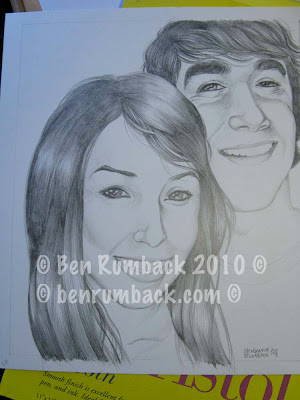 My pal Tyler ordered a portrait, I went with the simple elegance that is graphite, and sent it out to California, 2-day express, as I shipped it on the 21st of December. It made it on time! 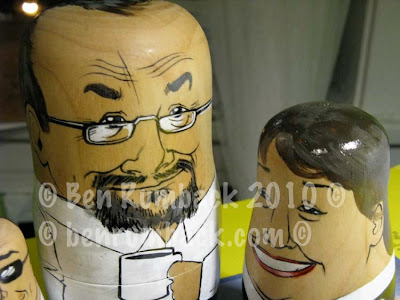 These and the Octo-puppet (below in the post) tie for my favorite commissions EVER. My cousin Margo had this great idea - Russian nesting dolls of her family, as a gift to her parents! I'm getting the marketing together to start taking orders - these turned out so nice, I have had a few people asking about ordering alreay! 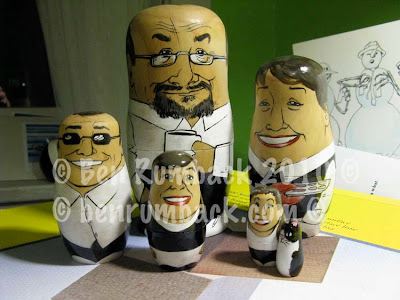 Hey Kansas! Mallory hit me up for this Wizard of Oz painting for her husband-to-be, Geoff. I loved it, so did Mallory. I'm planning on adding prints to my shop on etsy. 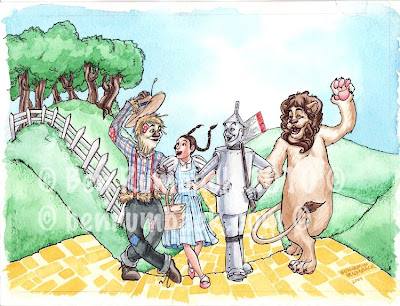 Holy shiz - look at that crazy thing! Hands down, my favorite puppet that I've ever built, followed closely by the zombies and the obese ginger. This was for my pal Kati, for her husband, Josh, in an amazing act of wifitude. Apparently, he once mentions, sleepily, in bed (pillow talk!), that he'd like an octopus puppet. Great idea, Josh. I loved bulding it. 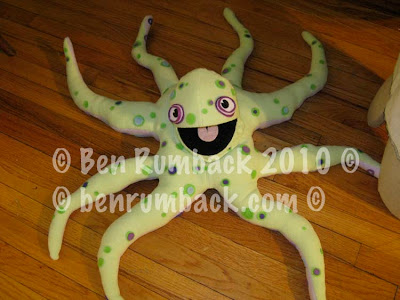 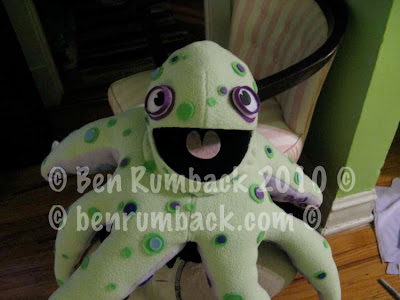 And, we share interests. Who doesn't love thie internets... and a jar... of rice? Weirdo. 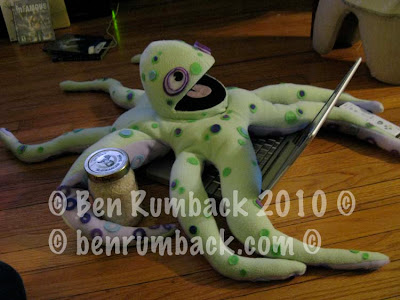 This one is a non-holiday commission that just happened to fall into the same crazy schedule. Turned out Cute, so I thought I'd post it. thanks for the work, Diana! 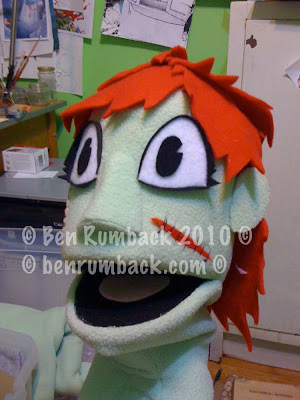 Also in the chaos months, I was lucky enough to make a puppet of Marguerite (blog), one of my favorite people, and who's husband, Ted the Rabbi, married us. Magical people. Great move, Dora, on envisioning Marguerite (website) in her true form: Puppet. The hair... God, the hair... took SEVEN hours, the night before it was to be gift-wrapped and delivered. Here she is, mid-weave... 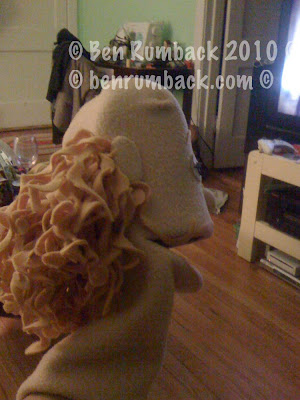 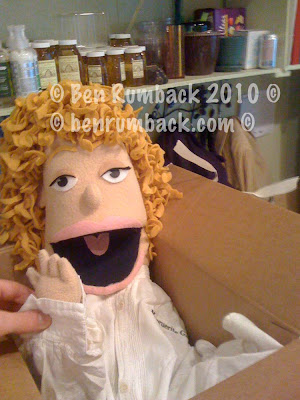 On to the gifts! I made this illustration for my Grandma Isa. In the background, you can see the bigger version, started for me mum last year, and ruined by rain during a freak rainstorm in June. I left the windows open, and, though it dried out with no visible ruination, when I went back to paint it in, I found that the paper wouldn't take the paint properly. Damn you, supersaturation! 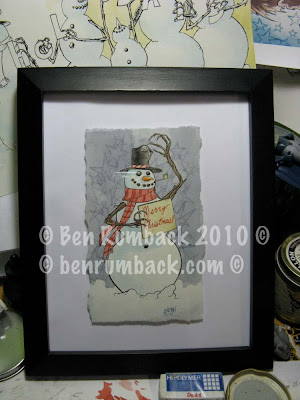 So, my dear mother got this one instead, painted on the night before Christmas (classic, ain't it), and survived being checked in baggage for the flight back to Kansas. A Christmas miracle! 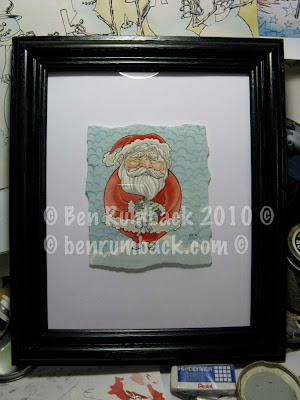 Aaaaand then, last week, I started doing some hybrid appliquae, embroidery and illustration. My instincts drove me to Star Wars, naturally, but I have plans to do some classic fairy tale stuff for sale. Han and Chewie! Hraaaaaaarrgh! 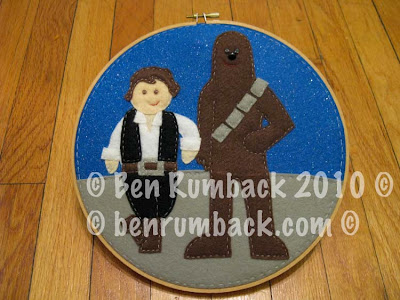 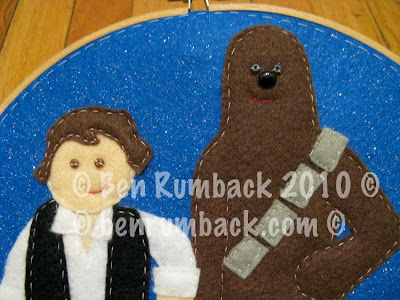 I went all 'gothic-cutsie' on the secnond piece. Still whittling out the process. 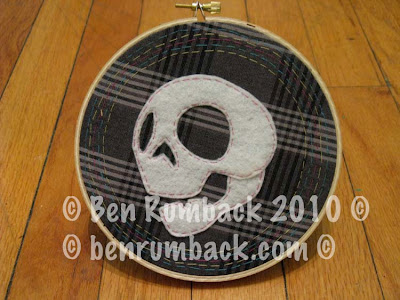 For the third, it was back to Star Wars (if it ain't broke? That is the second use of the word 'ain't' in this gigantic post... ew). Look! Sparkles! 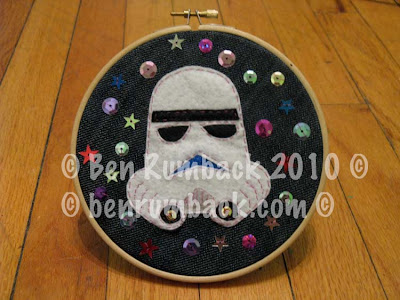 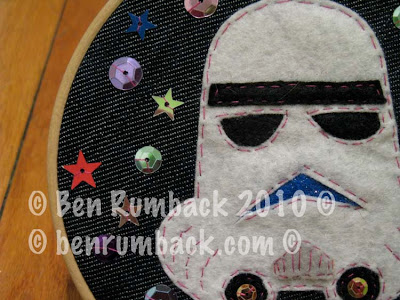 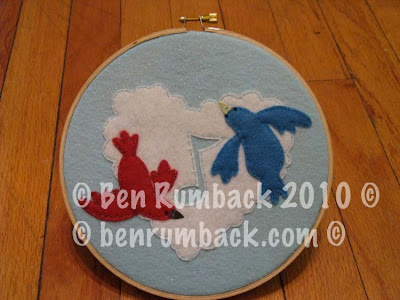 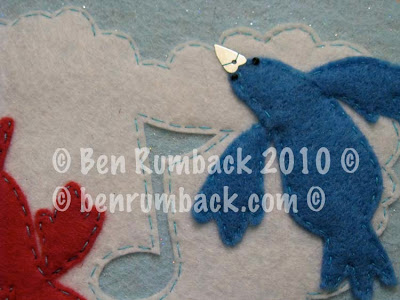 And HERE'S THE END! What a long post. Let me kow what you think, dear reader(s?). I'm curious and nervous for reactions to the craft-heavy artwork I'm doing currently.