Busy, like a, whataya call it? That rat thing with the flat tail. Like's trees. Buck teeth. Busy like one of those.

By George and Bob-howdy, I have been keeping busy! You won't hear me complain (unless I'm complaining, that is), but man ALIVE! Here are the highlights from the last eight-to-ten weeks. 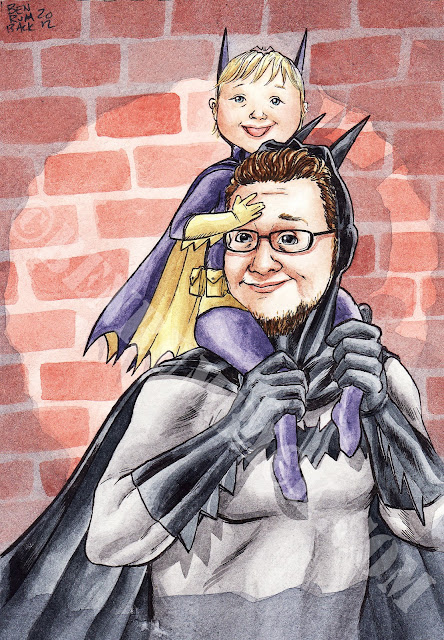 My good friend Joel was lucky enough to marry a lovely wife, who later brought along a sweet daughter. With Joel's birthday and Father's day fast approaching, Erin asked me to make this, which turned out lovely. That's Grace up on his shoulders, and everything was going great until I mailed it.

See, all of the zip codes in Lawrence, Kansas (where I used to live) go 606**, whereas all of the Chicago zips go 660**. I'm a feeble-minded young man, so I'll leave you to put the puzzle together and guess how I DERAILED a nice gifting experience. It took about two months to straighten itself out, and happened to get delivered while I was having a beer with Joel himself, in Kansas, just a few miles from his home. I could have biked it there faster! But it got there, and he loved it. FTW! 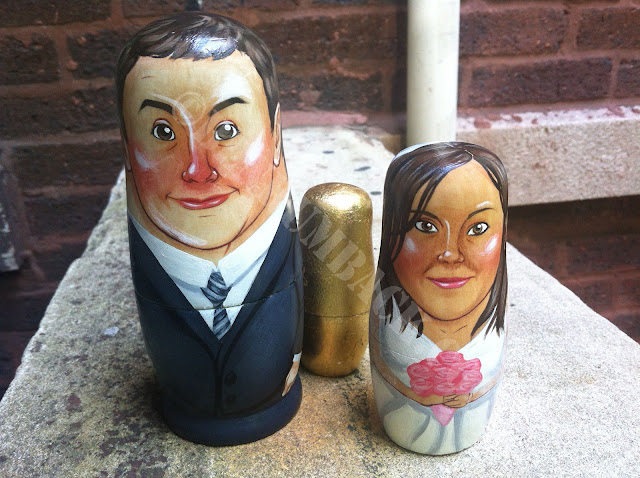 Then, of course, there is this one. I'll keep it short: He hated it. End of story.

I never heard if he went through with using these dolls as a vehicle for a marriage proposal, which was their intent. Custom artwork can be tricky, and I am more than pleased to say this is my second (#2) dissatisfied customer EVER. In the end, his dissatisfaction had to do with the likeness, in that they looked old and fat, which, you see, nesting dolls, their general shape is... Oh, well. 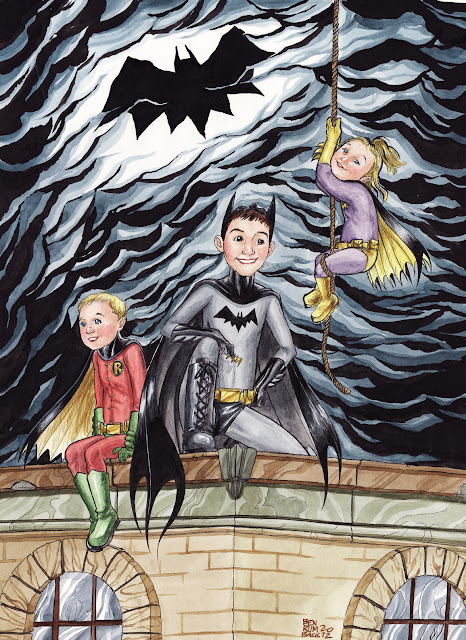 Back to happy! These kids turned out to love their portrait, all suited up to fight crime. It was a gift for the oldest childs' birthday (he's batman, there in the middle). The parents and kids were all very happy with it, I am pleased to share. 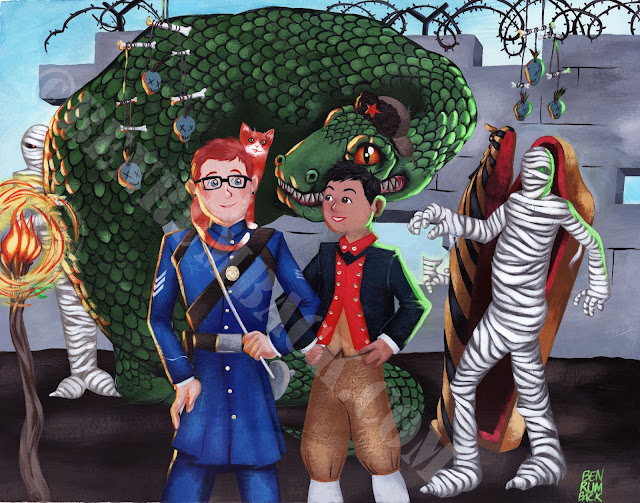 Next came the singularly most random and fun-to-paint wedding invitation OF ALL TIME. What you see here is the result of a request for a wedding invitation image that was to encompass, and I am quoting here, "mummies, sarcophagi, a T-Rex named Ivan, shrunken heads, the Berlin wall, something from the Revolutionary and Civil Wars,  the two grooms, and (their) cat, Carrie Fisher."

Basically, awesome. They loved it, and I wish them a long and happy marriage! You may recognize the fellows and their cat from a previous post, in which they were made into little, adorable peg people. 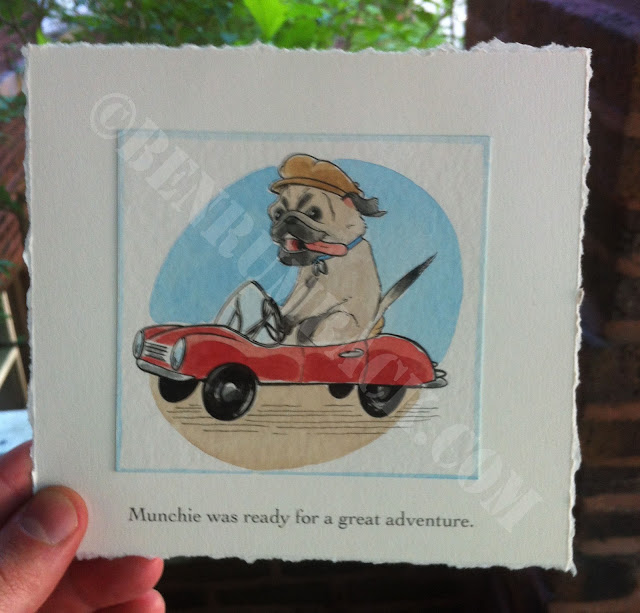 MUNCHIE! He's into adventures, apparently, which are chronicled verbally by my friend John and his wife, for whom this was a gift. We are all curious, John, and when the time comes, I expect to be considered for the illustration half of the award winning children's book. 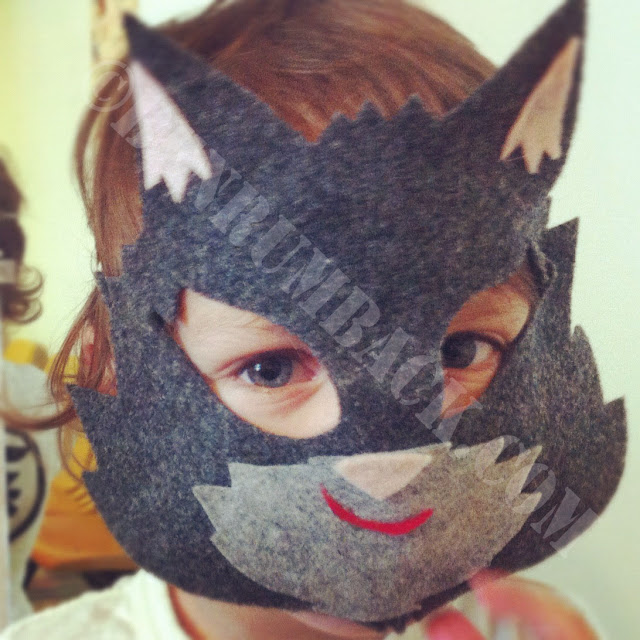 MASKS! On toddlers! So very cute. 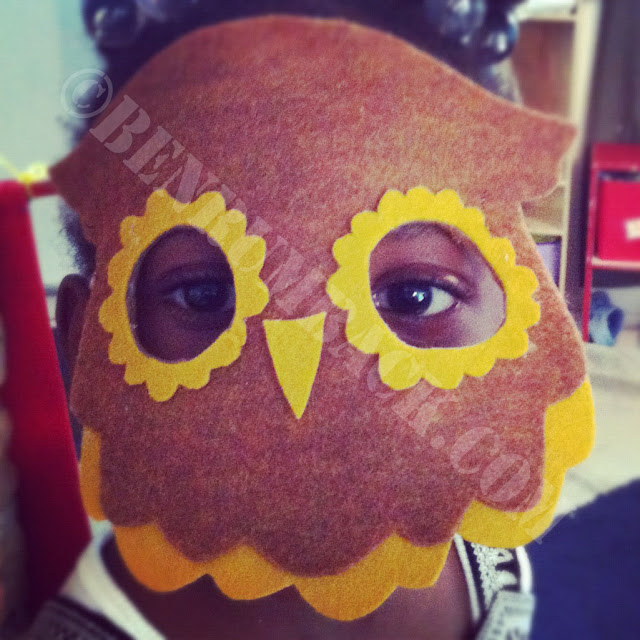 These were commissioned as take-away party favors for a very special fourth birthday party. They were a hit! 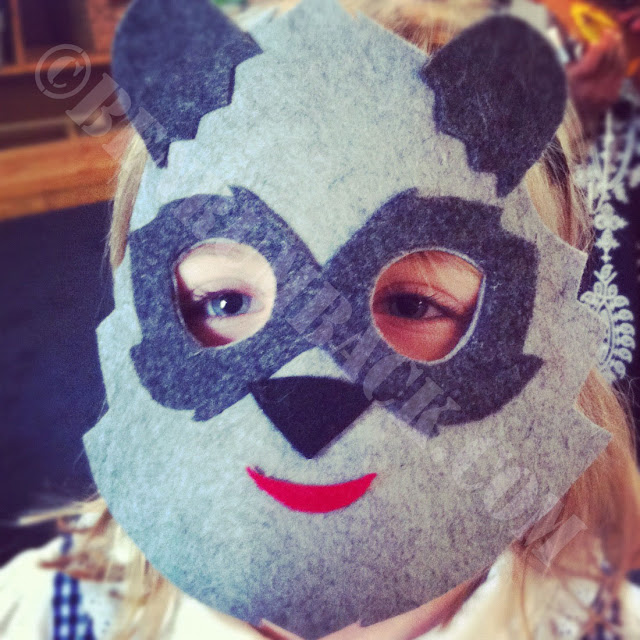 There was also a fox mask, which I somehow managed not to photograph. So cute! 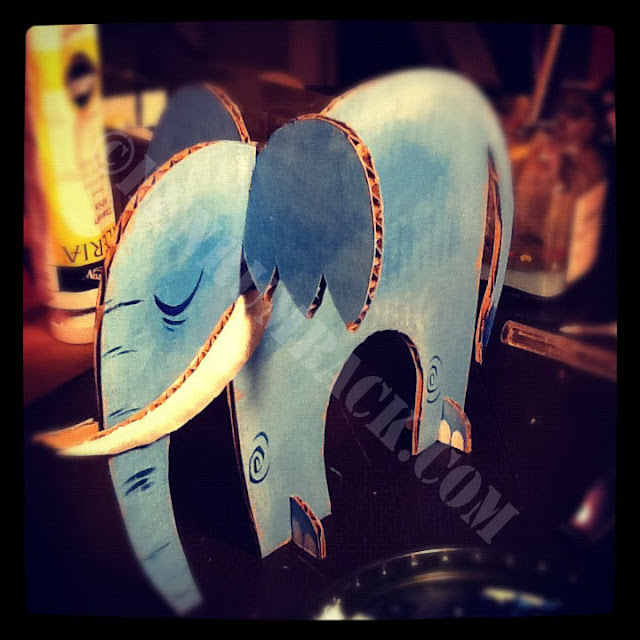 I made this elephant last night! I think I'll be pumping a few out to try to unload at Renegade Craft Fair, which I will again be participating in! Oh, boy, so much to do. 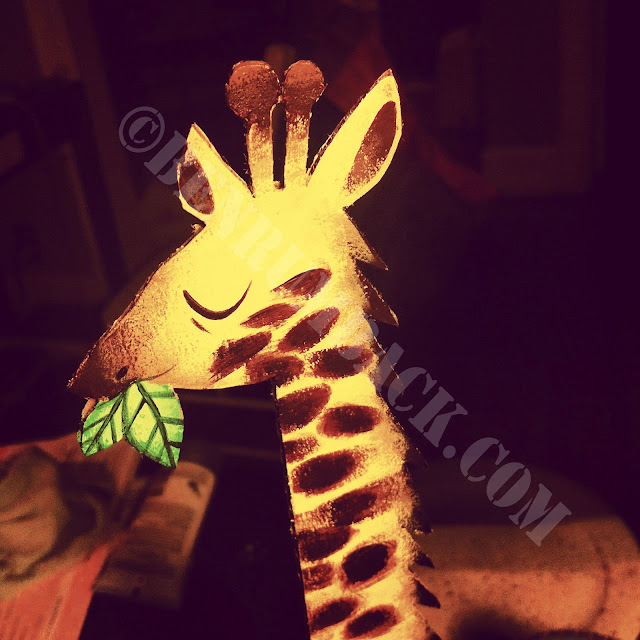 This giraffe happened today, and they are great friends, he and the elephant. I know because they TOLD ME. I need to sleep. 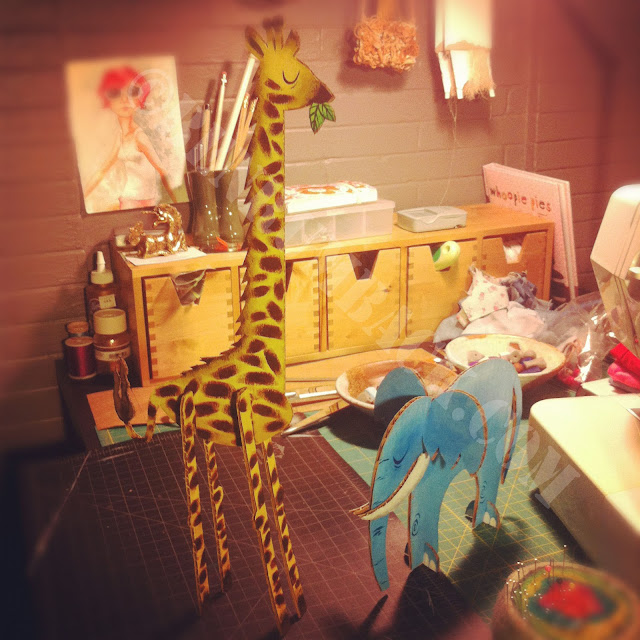 Oh no they're CONSPIRING AGAINST ME!  Sorry for the 'instagramminess' of some of these photos, I try not to use them outside of the 'gram itself, but it had to happen if I wanted to get this up tonight.

As always, thanks for reading!
Posted by benrum at 12:29 AM No comments:

Before I get started, let me say, right out here in the open, that this post is admittedly about six weeks late. I wanted to get this on record the week I returned to sunny Chicagoland, but things happen to happen the way they happen, and sometimes that means all at once, in an unrelenting spiral of chaos and productivity. But that isn't always a bad thing! 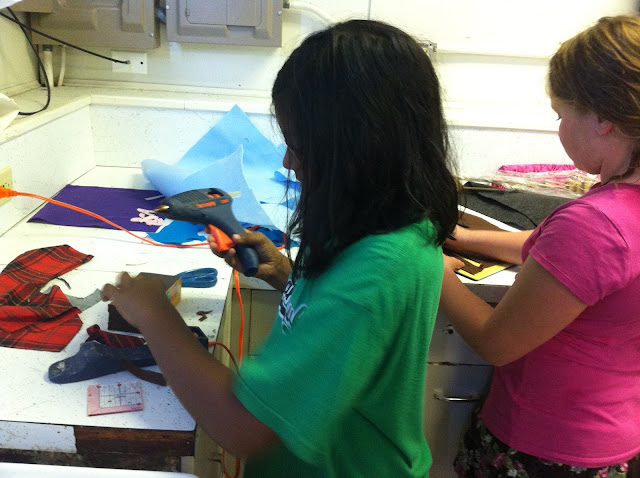 To Art Camp! This was the fourth year of camp and the group, while ever-changing, stayed mostly the same. The age range of the group has expanded further each year, with our youngest being seven, and this year the oldest was fourteen. 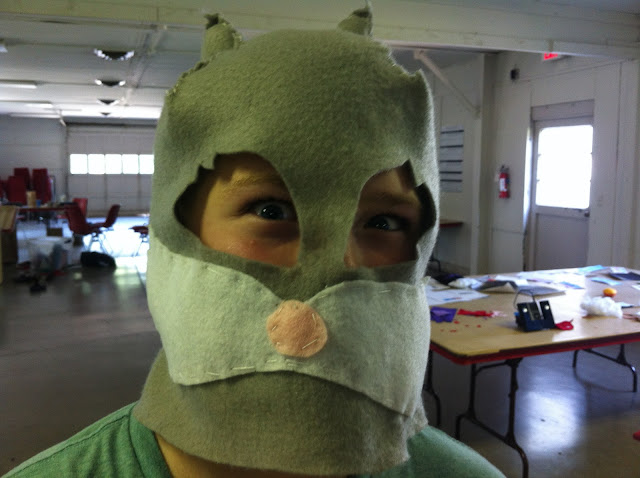 We managed to all work well together, and the kids turned out some amazing work. The return of fiber arts and hand-sewn felt craft is evident here, with Drew looking TERRIFYING in his fox mask. 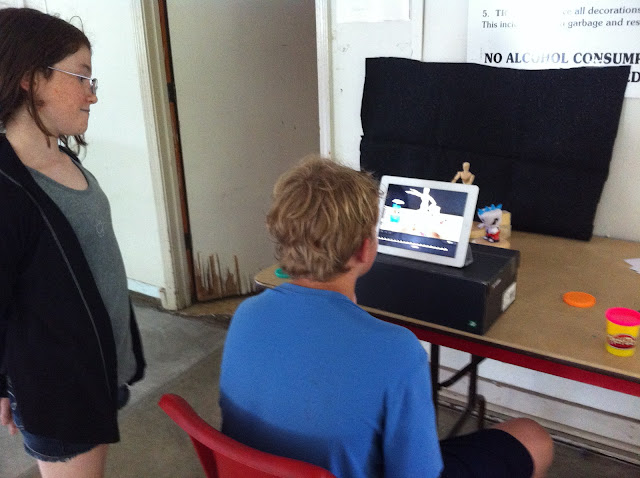 One of the new mediums explored this year was animation. Here you can see Jackson hard at work in the animation corner, which we jokingly dubbed 'Pixar Jr.' 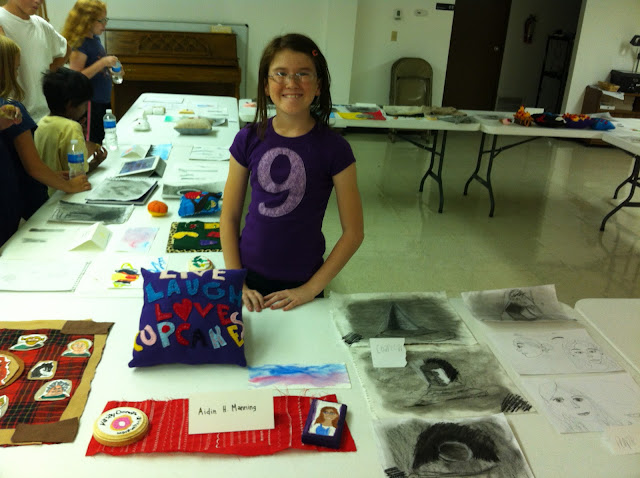 On the last day, we invited parents to come see what we had been up to all week, and each of the campers had a table of their own to showcase their thirty-plus hours of work finished in the five days we met. Aidin had a lot to show, even though it seemed like that cupcake pillow might take the whole week to finish! 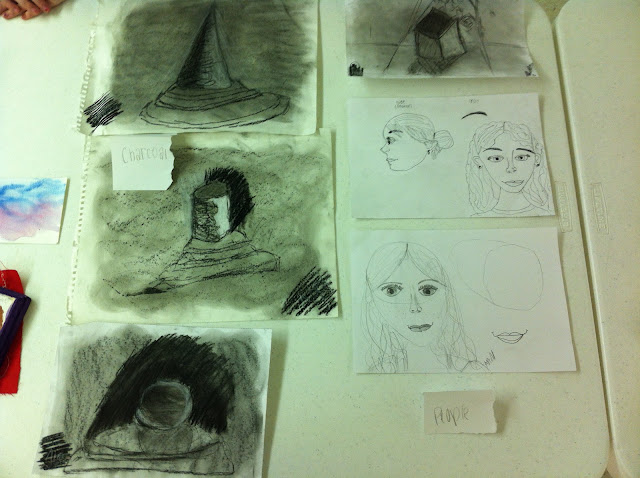 It's worth mentioning that the real Pixar movie, Brave, opened a few days before we started our week, and so, showed up in some of the projects, most notably the family tapestry that Aidin recreated. 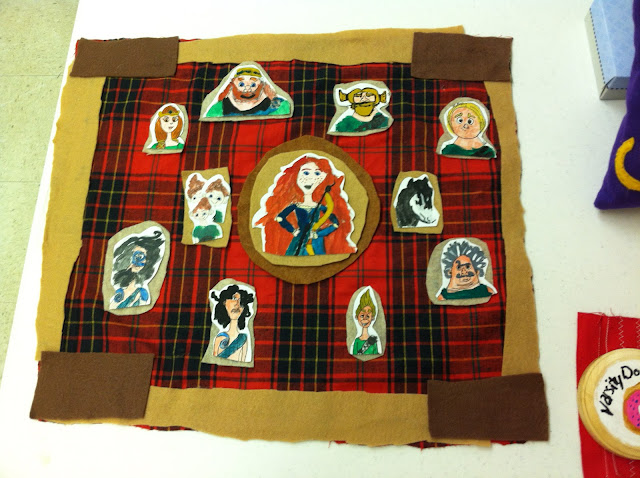 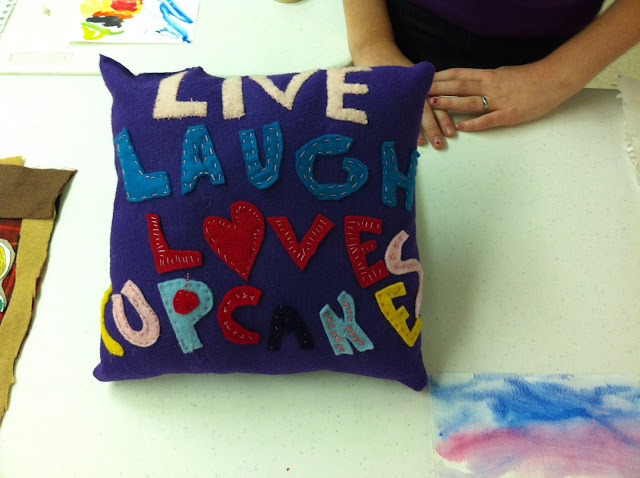 All of that embroidery, those poor little fingers! And on the back? 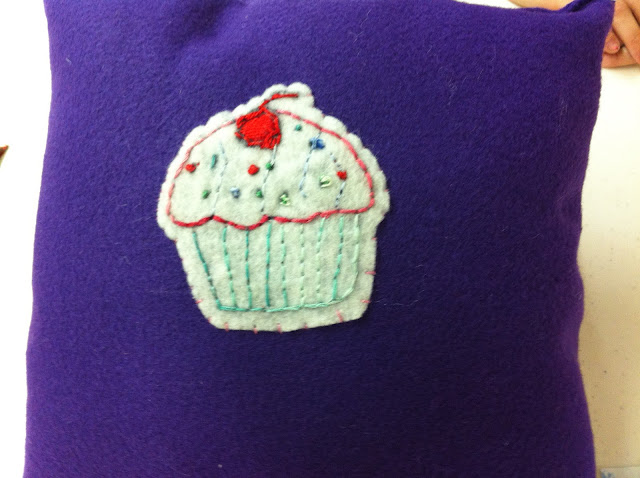 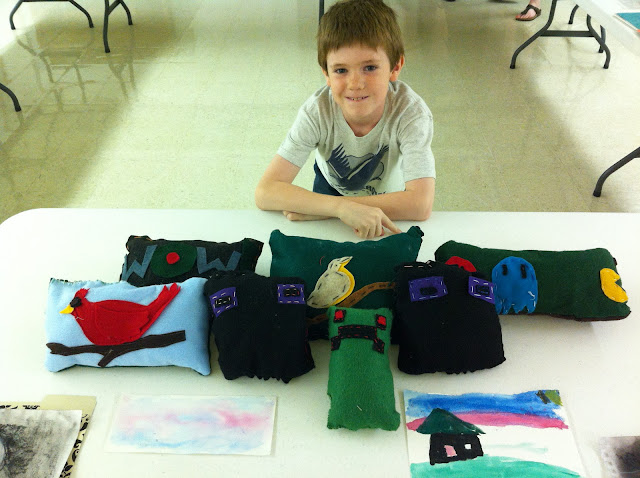 Eliot had a lot of fun sewing, painting and drawing, and helped maintain the 'geek-cred' we established in previous years by making Minecraft themed pillows. 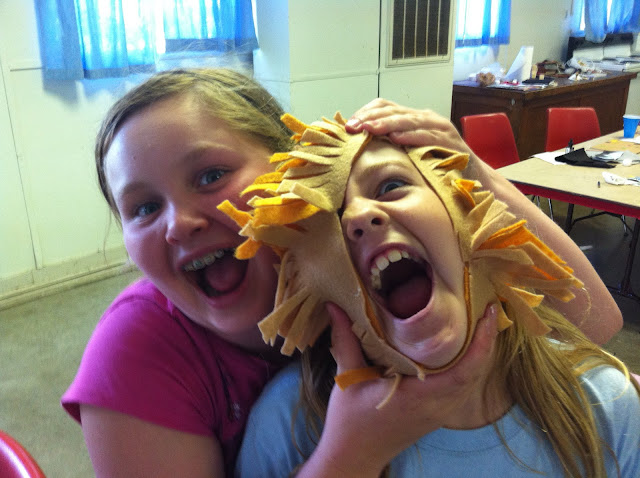 Payton and Julia, hard, hard at work. Sometimes you have to tear them away and remind them that they are children, and should enjoy life! (joke) 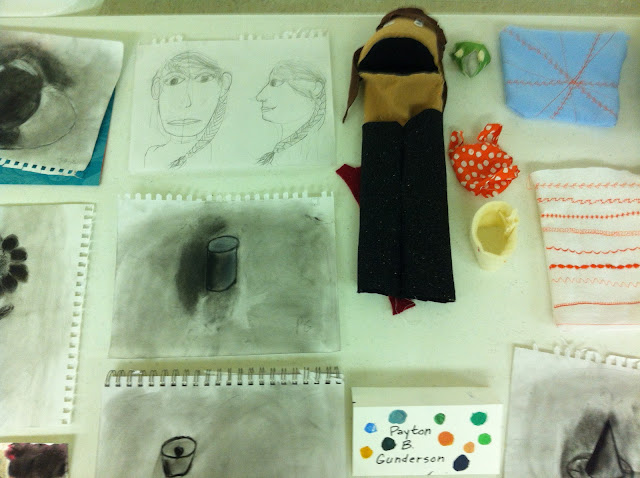 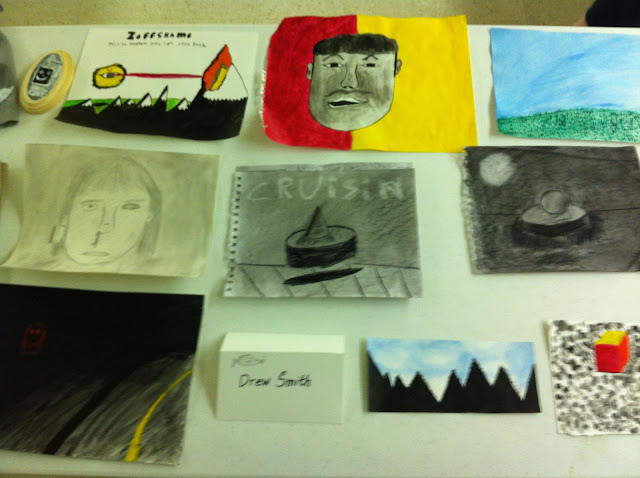 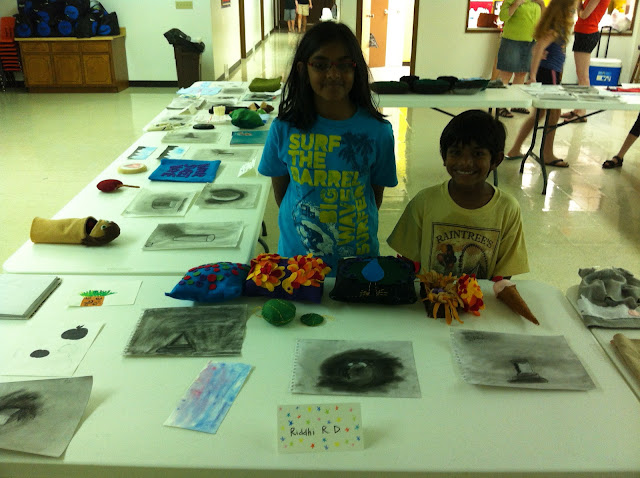 Riddhi and her little brother Dhruv displayed together, initially, then had to use two tables when they realized how many pieces they had completed. 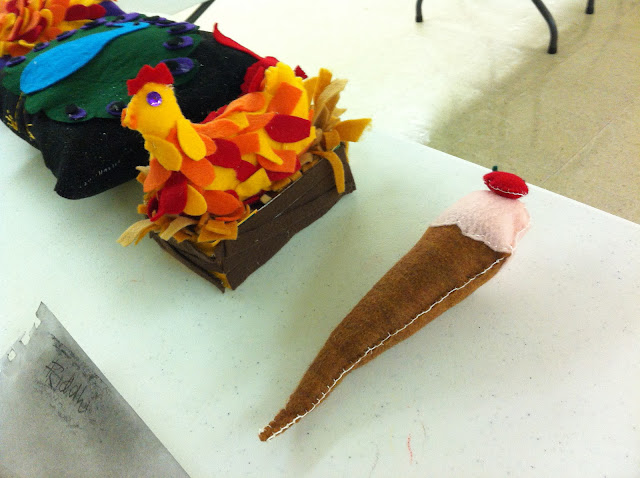 Riddhi started to make a chicken plush, and ended up making three left-facing chickens (the feathers all on the same side), before she was able to focus and make an opposing side, to complete the stuffed bird. 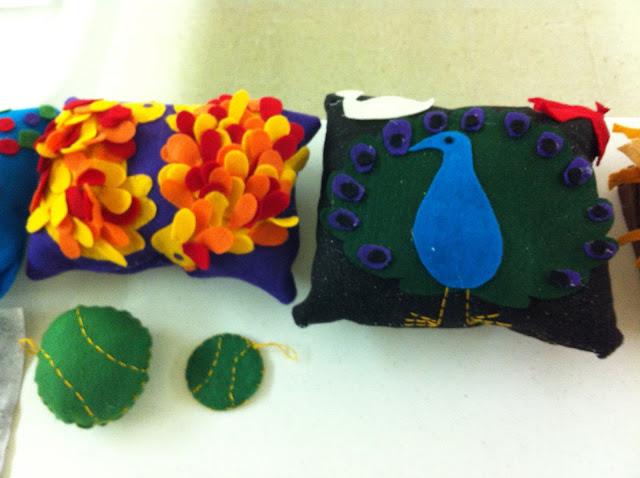 The extra lefties weren't a complete wash, though! She ended up with a beautifully embellished chicken pillow. 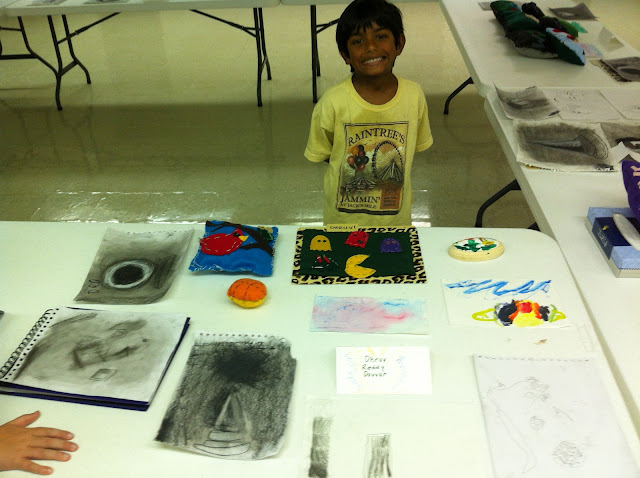 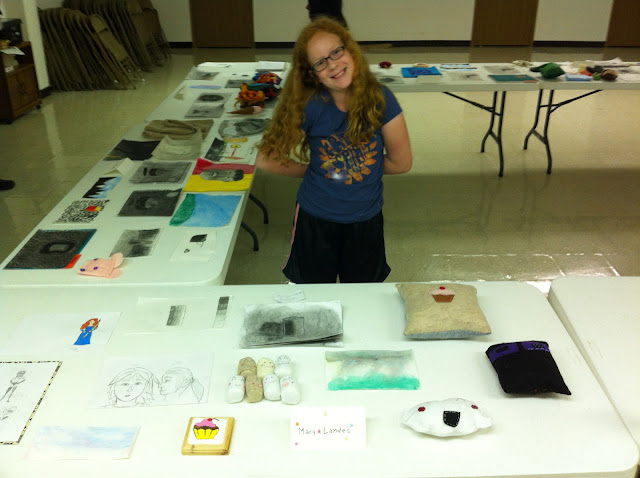 Macy worked hard all week honing her different interests like sewing, working toward a better grasp on drawing people with proper proportions, and wet-media. On day four, though, she found her calling... 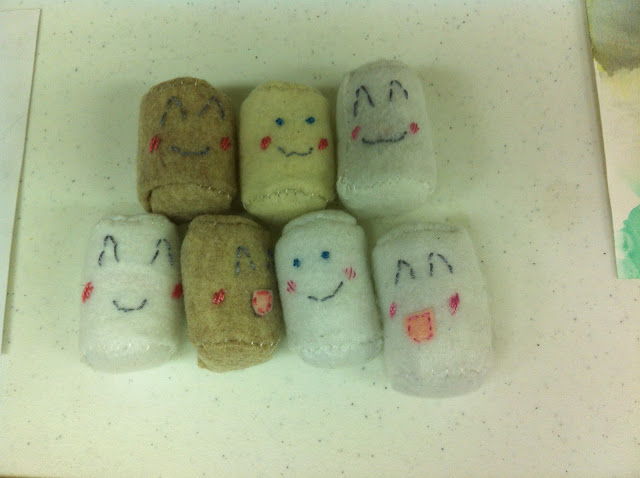 It was a great week, and I was lucky and happy to spend it with such talented, focused kids. Great work, everyone! See you next summer. Until then, bask in the glory of the complete Art Camp 2012 Animation Collection: Volume 1!

Posted by benrum at 5:04 PM No comments: