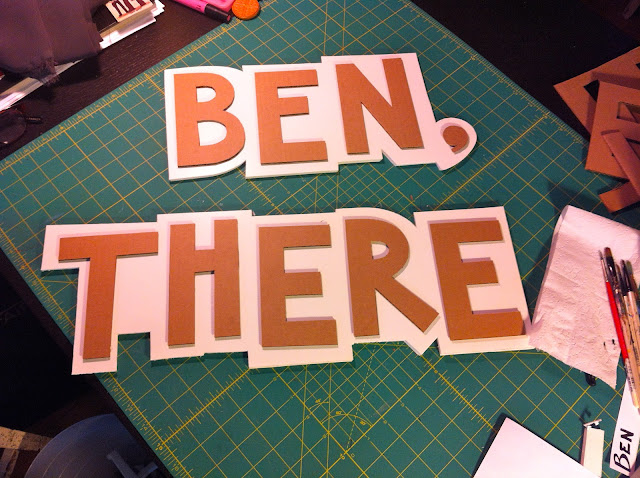 Hoo, boy, whoa, wow, what a busy couple of months! As you know, good reader, I partook in my first Artist's Alley this year at C2E2 (Chicago Comic & Entertainment Expo), and boy are my fingers tired! There was a set up to a joke there, but I seem to have missed it entirely. C2E2! It was great! I met a ton of awesome people, got to shake hands and actually TALK with the legendary Tim Sale (my favorite Batman artist), Adam Hughes (artist of beautiful women and other things), and a few others. I was seated next to my (dare I say) new friends from Yeti Press, a local comic publishing house, and had one to four of my very best friends at my side, helping with my table, at any given time, each of the three days. This post will whisk you away to the magical (and, at times, grueling) weekend experience! 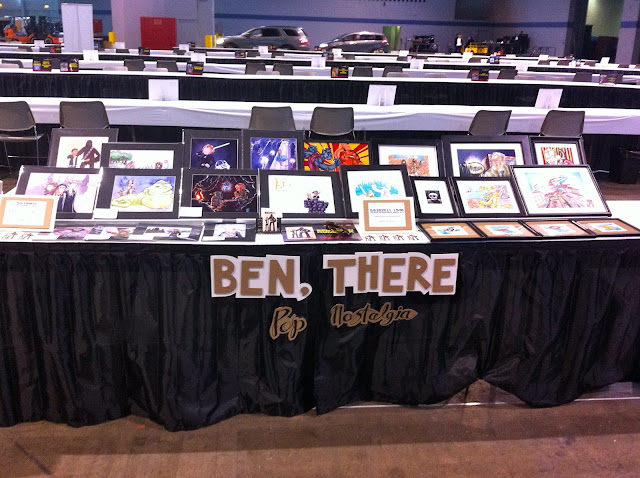 There it is! That's me! That's my table! That eight foot slab sums up many sleepless nights and long saturdays of my past months. The 'con' was awesome, though, and totally worth the investment of time and dollars. I made up my table mid-day on day two, and from there, started working toward a profit. It's not all about the money, but let us be honest... the money helps. I am very proud of my signs. If you can't make it out, it says "Ben, There! Pop Nostalgia," which is the name I adopted at Renegade many moons ago. The cursive looks a lot better in person, and at two-or-so in the morning. 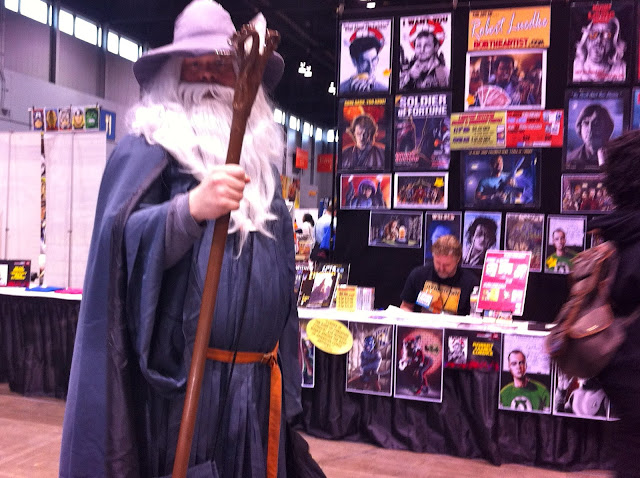 Let's start things off with Gandalf the Grey. He is found at the start of stories far greater than mine, but since he is here, I'll use him! He was one of my first costumed visitors, and his staff, of course, glowed mightily. 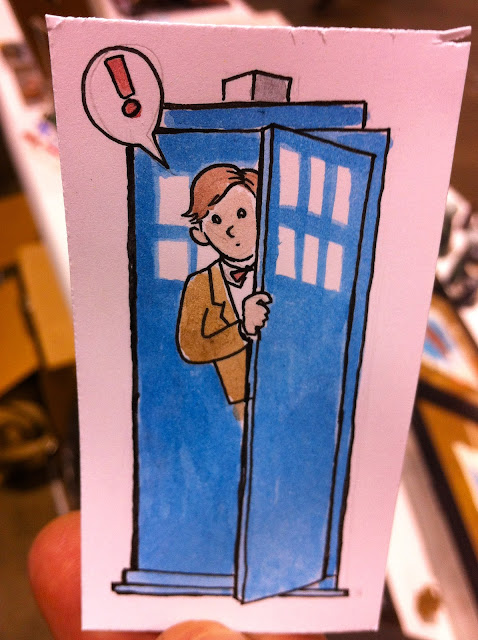 Okay, let me say, when I made a little sign for $5 micro paintings to be painted on the scraps and off-cuts of prints, I didn't know what I was getting into. 'I'll do ten or fifteen,' though I, 'It will be a nice time-burner during the low hours of inactivity at C2,' said the fool. Man-o-man, was I wrong! These little buggers became the focus of my weekend! Let me assure you, I'm not complaining; Five bucks is five bucks, but these con-goers love some cheap original art! 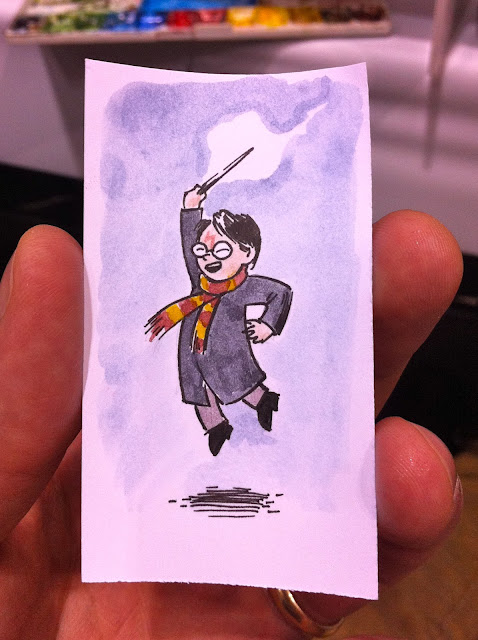 One of the first (of many, maybe ten) Harry Potters I painted. 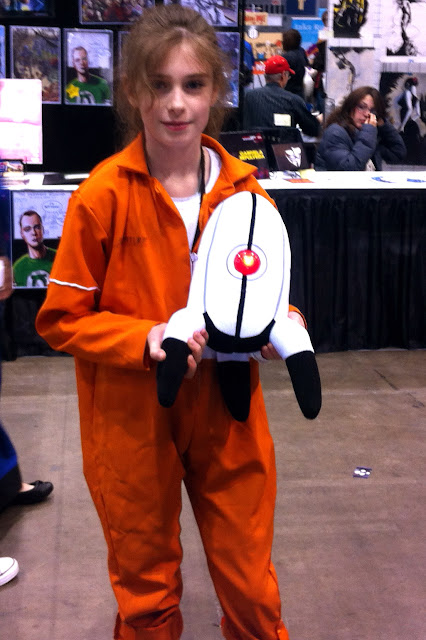 Cos-play break! This kid was great, and polite, and well 'stumed, as Chell from Portal and Portal 2, some of my best hours spent at the ol' Playstation. 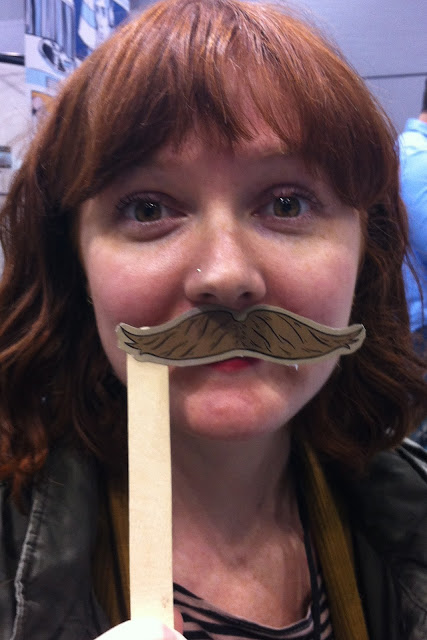 My darling Martha came and helped out on day one (Friday) and is seen here adorning one of the many, many (fantastic) mustaches handed out by Yeti Press. "Free mustaches!" It still haunts my waking nightmarish recollections... *shudder* 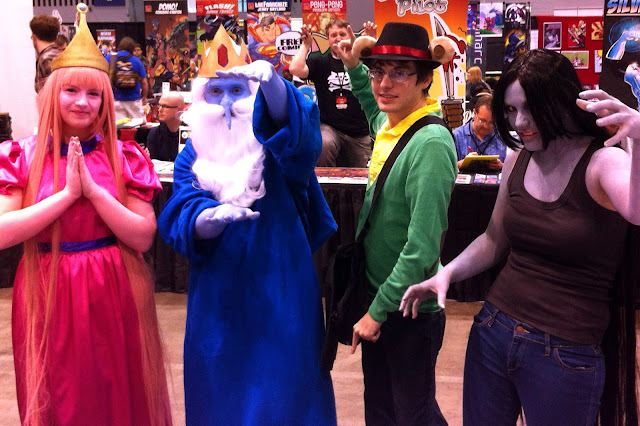 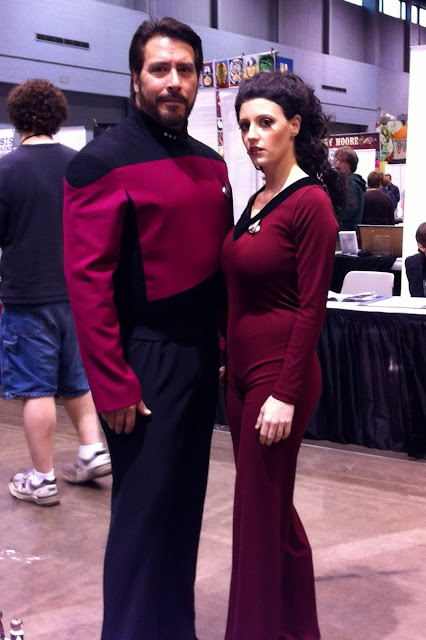 Star Track! (I kid, I kid) Martha was thrilled by these two - she has a secret geekery in the New Generation line. 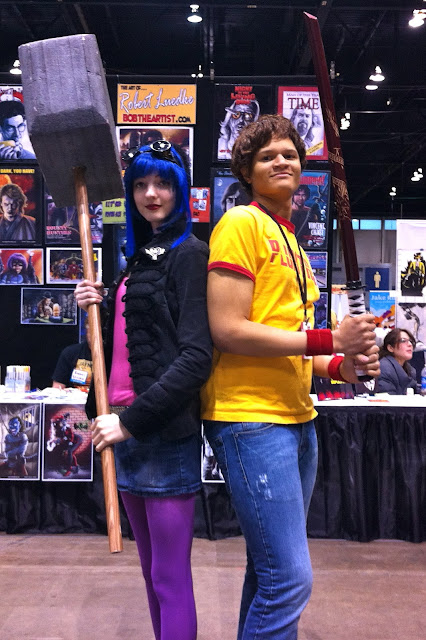 These were two of the better Scott and Ramona's, of which there were many. Girls seem to love this costume because it involves dressing cute and sometimes... Goggles. 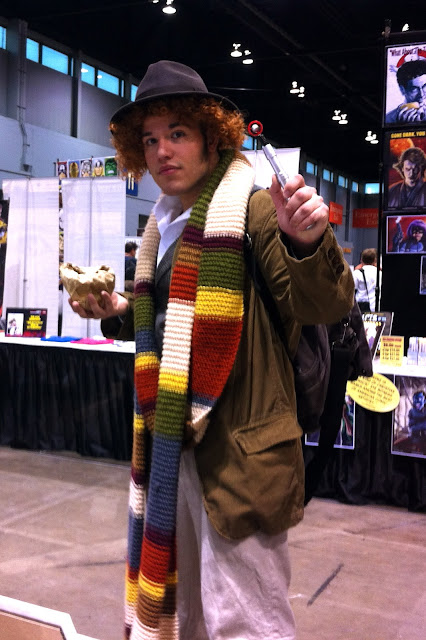 One of the better Doctors. Okay, fine, I'll type it... JOSH WAS RIGHT. There, Josh, you win, in capitol letters and underlined. He told me through and through that I should be making Dr. Who merch... apparently this 'Tardis' thing is catching. 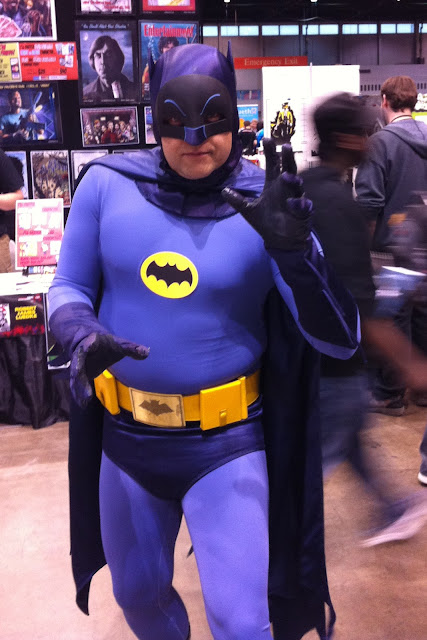 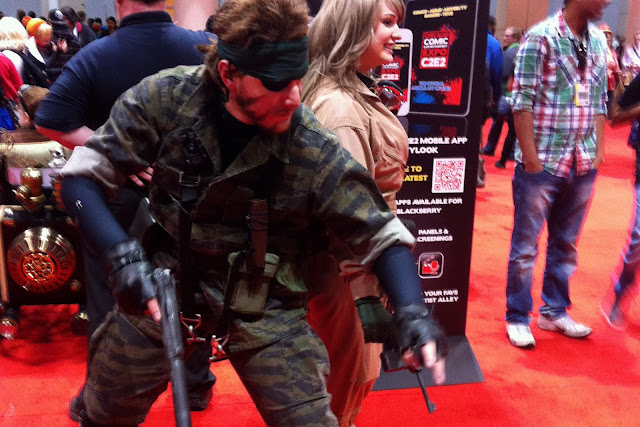 SNAAAAAAAAKE! If you don't get it, congratulations, you have a life outside of video-games. 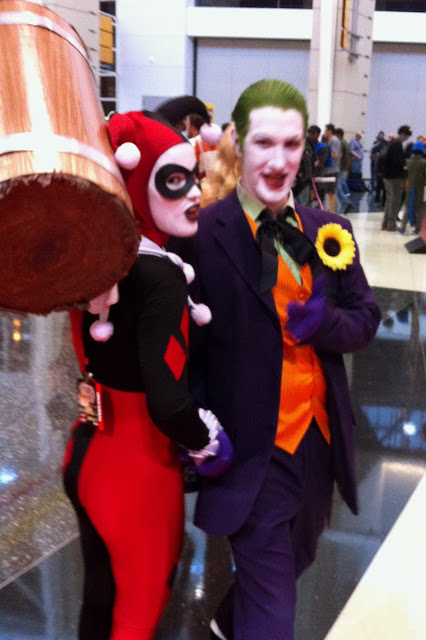 Of all the Jokers and Harleys, the ones with a giant mallet stole my heart, this one in particular. 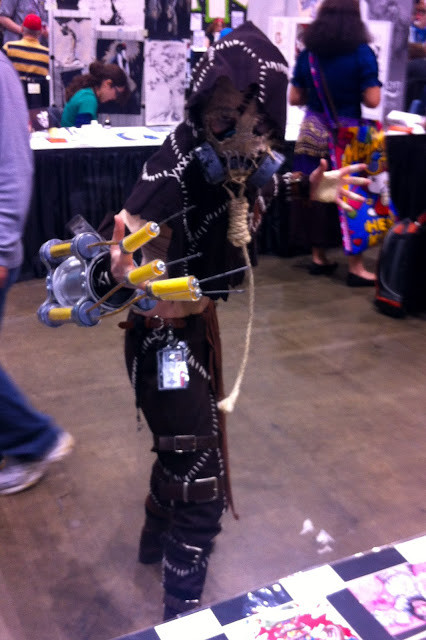 When Arkham Asylum Scarecrow showed up (and was a cute girl, bonus!), I had a total geek out. 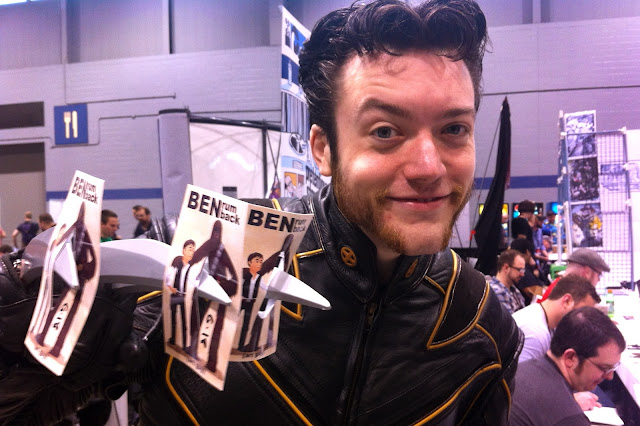 Let it be said that my good friend John did more for my booth than maybe anyone, self included, by standing around in his movie-accurate Wolverine costume. He switched midday into Logan, which just drove the point home... with more hyper-detailed accuracy to the movies. Thanks, John! 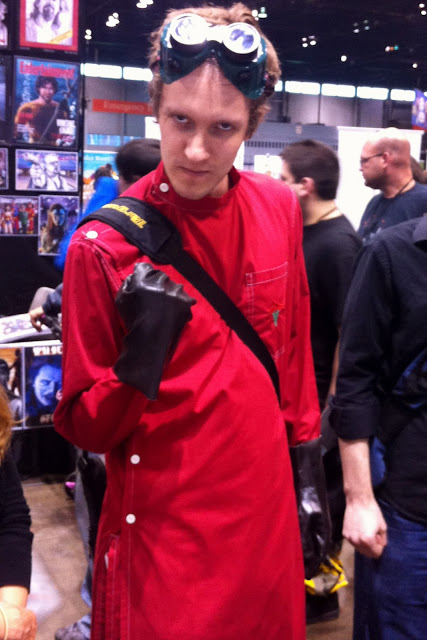 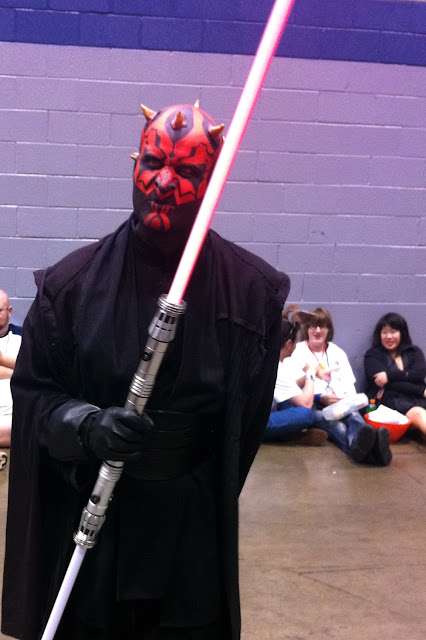 As much as i loooooathe Episode I, no one can deny the absolute wickedness of Darth Maul, the great underused villain in science fiction. His costume and make-up blew me away. 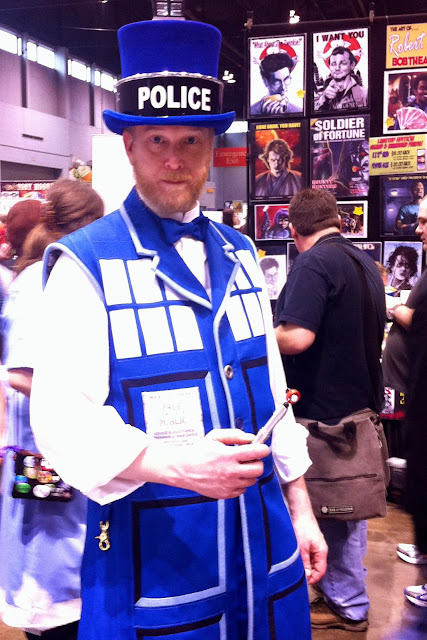 TARDIS MAN! Damn, I really should have done some Dr. Who art that wasn't a micro painting... boo. 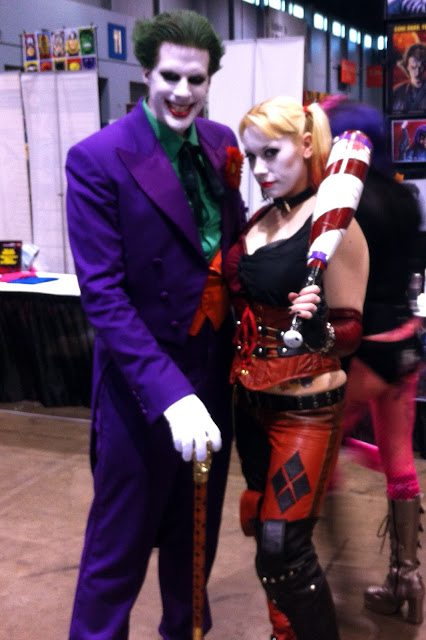 I deeply appreciate this one - half Batman: The Animated Series, half Arkham City... All great! 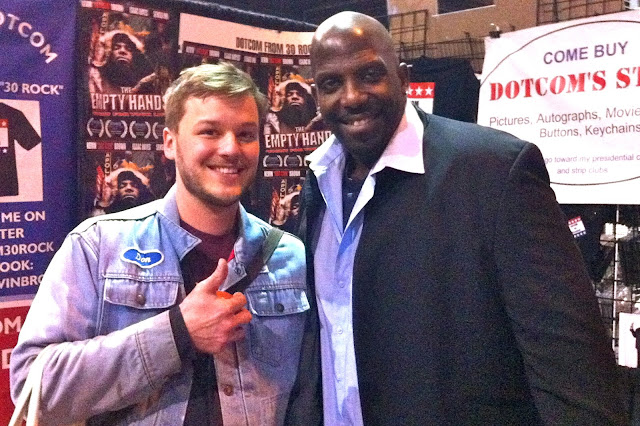 I was fortunate enough to meet Walter 'Dot Com' Slattery (Kevin Brown) after hours on day two. He was seemingly delighted to grace me a photo, after a long day, off the clock, and acted like I was doing HIM a favor. What a nice guy. 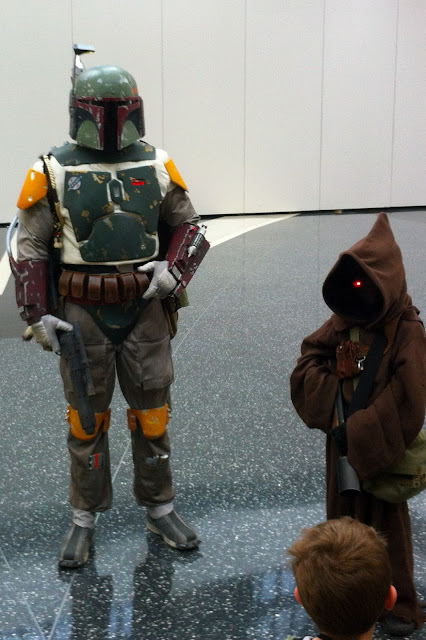 Father/son (daughter?) duo, blowing me away with their amazing costumes. So good, even up close. Note the glowing Jawa eyes: so cool. 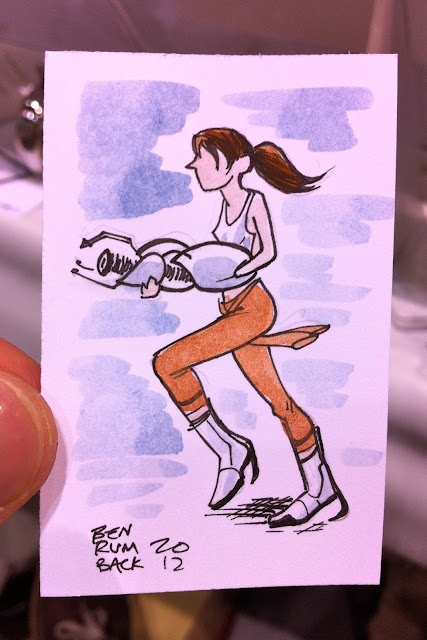 Inspired by the tiny Chell above, I did some Portal/Aperture Science micro-paintings. 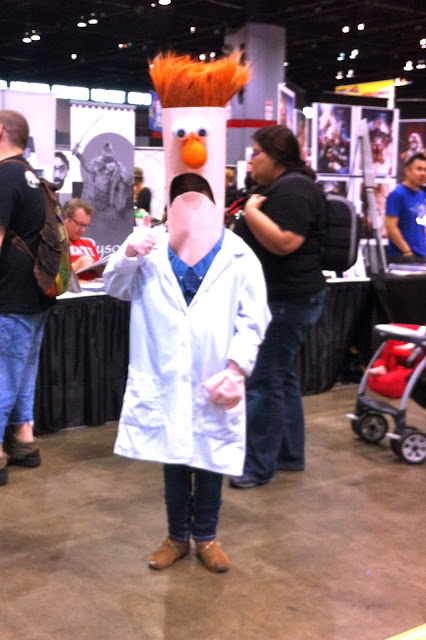 After everything, my favo-costume goes to Beaker, on kid's day (Sunday). If I wasn't so damned honorable, I'd steal this for hallowe'en.

Big, big thanks to everyone who met me, liked my art, and tossed a dollar my way this weekend. You people built me up more than I deserve, and I am deeply, hugely flattered, and astonished, at every sale I make.

If you came here looking for something I had on display and it isn't listed in my shop, please do e-mail me at benrum@gmail.com. Most work featured is still available.

Posted by benrum at 1:22 AM No comments:

Howdy y'all! How's the day of foolishness and fibbery treating you? I am yet to be pranked, but remaining vigilant. I finished up another new painting this week and though I would share the process with you. Here it is - same subject as my last - STAR WARS! I love drawing R2-D2, he's so cute. 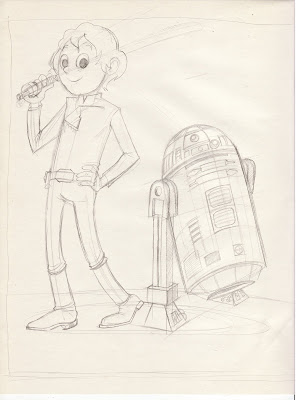 The sketch above was quickly copied onto a prepared grey background, and I used white transfer paper to get the job done. Love that stuff! 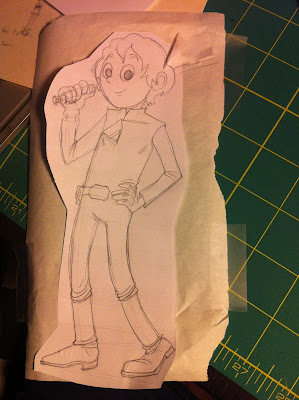 I didn't take many process photos, so here is a short trip to nearly finished. 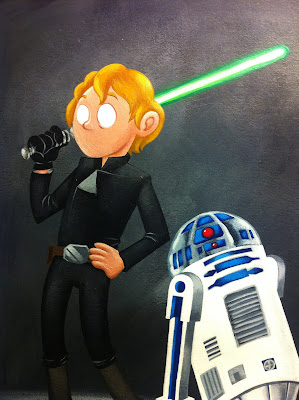 ...Aaand DONE! Please excuse the copyrights - if you buy the original or a print, it will be 'c' free, obviously. Glee! Less than two weeks to C2E2, so it's back to my desk with me! 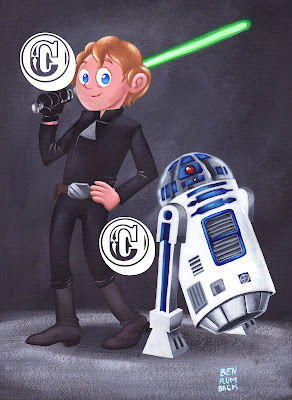 Posted by benrum at 1:29 PM No comments: