Holidays... merry, bright, all that biz.

They're here, they're here! Get your santa hat, break out your credit cards, and eat waaaay too much! That's what we're getting ready to do this weekend. Martha's parents AND my parents are coming to Chicago to get their thanksgiving on... it's going to be cuh-razy. Also, I'm starting up the portrait promotions to make some nice gifts/extra holiday cash. Let me know if anyone needs some drawing done! I'll never stop being amazed by how excited people get when they realize I do animals as well. Draw them, that is. 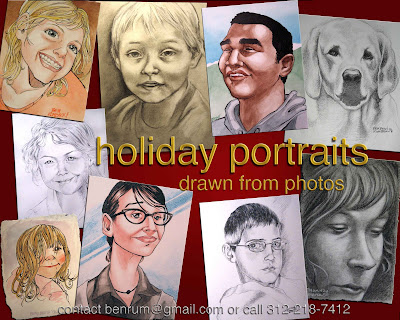 Email me at benrum@gmail.com for price queries and deadlines.
Posted by benrum at 5:38 PM 1 comment:

In college, in an acting I class, I met a man named Paul Santos. It's because of Paul that I've become so undeniably involved with puppets. When I lived in Lawrence, I was working side-by-side with Paul on his reason for being: The Felt Show. Our friendship hinged on his paying me to make puppets. His adamance for deadlines and my (then) predilection to procrastinate almost derailed what friendship we had, in those early days. Now, though, we get along like elephants and dandelions... which is, I assume, really well. We stay in touch as friends and as coworkers, since Martha and I moved up to Chicago. I miss working with Paul firsthand, and I miss puppeteering, from time to time, but the man keeps me in projects, like these below. I sill make the puppets, and I'll post some pictures of them
sometime. For now, my favorite fliers.
This election day poster is my very favorite that I've ever done. A lot of time was spent in photoshop, aging this baby up... and people really liked the result, according to Paul. That's how I end almost all of my statements: According to Paul. Not really. 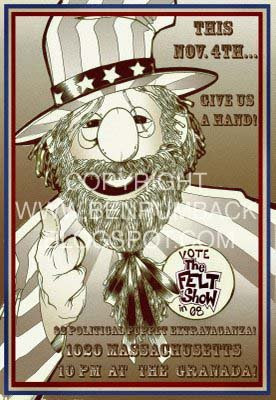 Until the election poster, this was my favorite, if for no other reason than because I'm a nerd. It was really fun drawing a few of my puppets into the classic star wars poses. And asking a trash can to stand in for R2 is always funny to me. 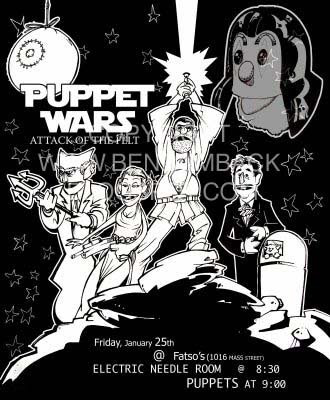 Paul has the good ideas. Our flier designs are almost always hashed out in one discussion over the phone. Paul says he needs a flier for this date or that, and we start talking themes. This show was a musical, or at least music heavy, show, so we talked album covers for maybe ten minutes, and agreed on this fine looking spoof. 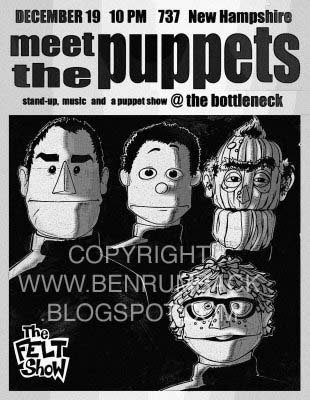 The College Sucks flier was one of the first ones that I really got into, on the illustration side. Before this, the drawings were fine, if not a little bland, but this one signified the shift between drawings and illustrations. At least it did, to me. Oh yeah, and, According to Paul. 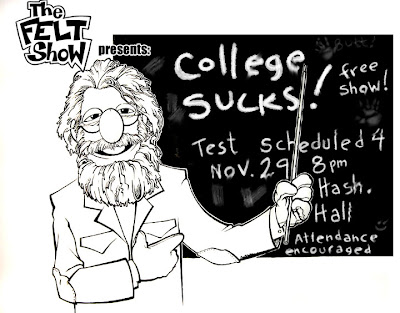 Let's start this thing right. We got a LOT of attention on the bus last night! 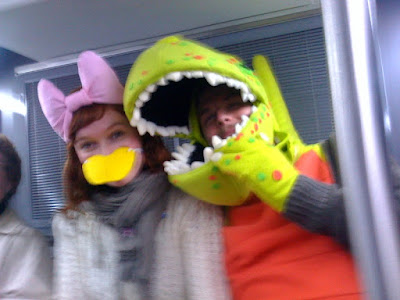 The people who know me best could tell you, or, I guess I can tell you, as I'm the one writing... I take Hallowe'en very seriously. I love (almost) all things spooky, creepy and macabre. More than anything, I like the dressing up part! Over the years I've built up the expectations of my friends and family with my passion for making a better costume than the year before. This year, I did pretty good, I think. We'll start with the sketch: 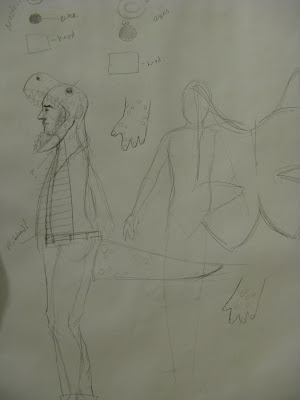 I dove right in after working out the details on paper, and, as always, had to make a LOT of changes and sacrifices along the way. Rather than take up line after line with detailed description of my long quest of fleece and foam, I'll just hit you with a work collage to summarize. 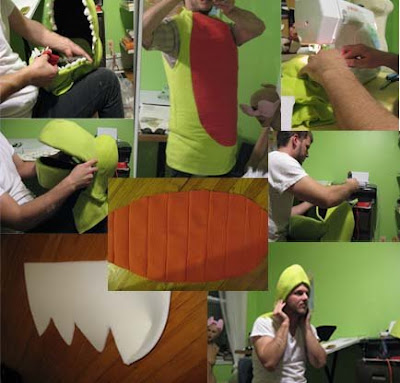 And then I became THIS BEAST! It's a little warm in there, but, lucky for me, it was plenty chilly outside this weekend. 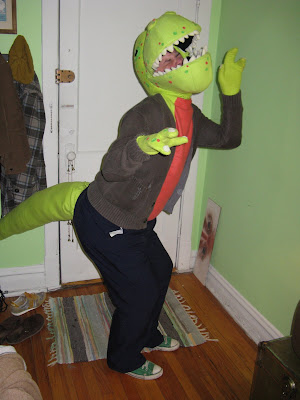 Here's a better shot of my fine-looking tail. 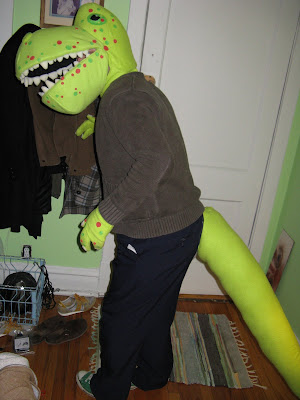 I included this one because it's a funny shot.  Happy Hallowe'en! 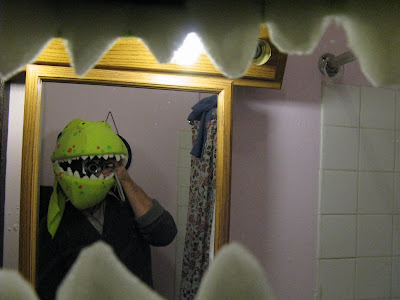