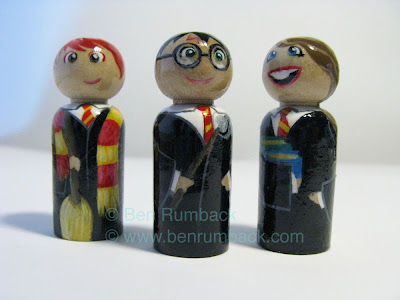 This morning I finished painting the trio of tiny wizards that I've been working on for a few days. If I may say so, they're pretty funking cute! Here are some close-ups! 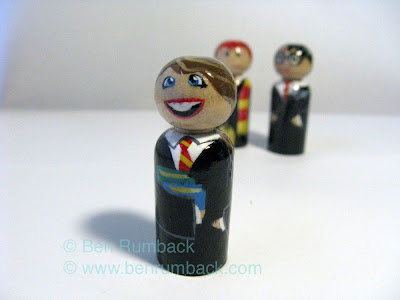 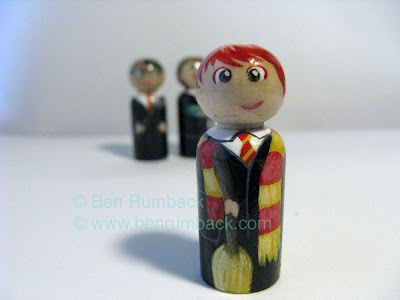 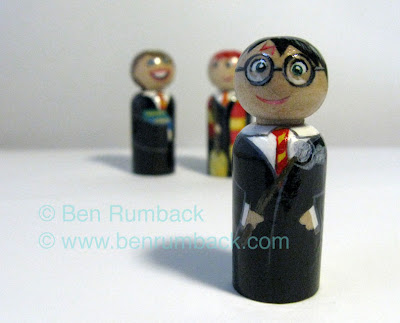 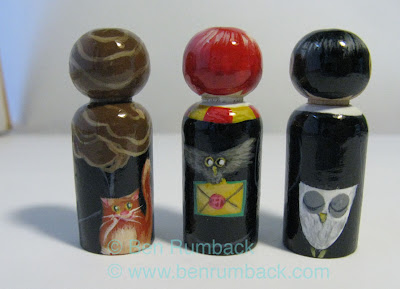 OMG! PETS on BUTTS!
I was bothered by the wasted space on their backsides. What's the point of a piece of 3-D art if it's only cool on one side. Then it hit me: pets. Better still, pets... on butts.
Each of these little guys stands 1 and 1/2 inches tall, and is totally cool in every way. I hope I'm not over-hyping them. :)
As for the pegs, I get mine from an ETSY shop run by a super friendly, prompt and courteous girl named Amy. Here's the link to her shop, My Friend Amy, where she sells pegs, twine and many other neat things. Just this week I picked up a really cool needle keeper (to keep my needles), a set of the slightly more substantial 2" pegs, as well as a handful of the 5" pegs, which I'm REALLY looking forward to painting!
Posted by benrum at 5:08 PM 1 comment:

In the days AFTER my much talked about recent show (talked about by ME, of course), I finished up an order of custom order of Russian (or) Matryoshka (or) nesting dolls. This is the second set I've done, and I'm going to open them up for online commission soon. People seem to think that they are adorable, and I can attest that at least this particular FAMILY that these were modeled after, is, in fact, adorable. Let me know what you think! 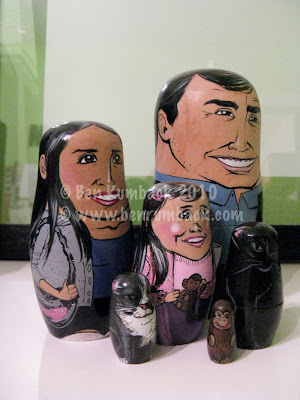 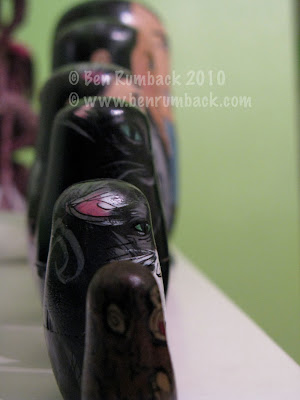 The parents here, Matt and Maria, asked me to paint the two of them, their daughter Zoe, their two cats, Pong and QQ, and a fictional pet monkey, as little Zoe loves monkeys so very much. The set was a gift to Zo for her fifth birthday. 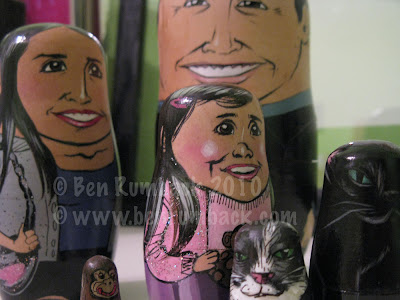 Here's a proper shot for scale. The biggest one is about seven inches, and the little guy is about three-quarters of an inch, all are wood, which I stain to varying degrees to attain a natural looking skin tone. 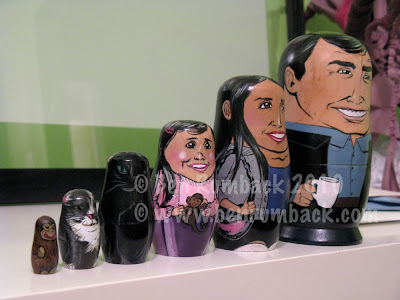 I asked Zoe, after she had been carrying them around protectively for a few hours, which one she liked best, and she said 'All of them. But could you paint Pong (the black cat) over again, to look less evil?' Hilarious.
Posted by benrum at 8:00 PM No comments:

The act and the aftermath 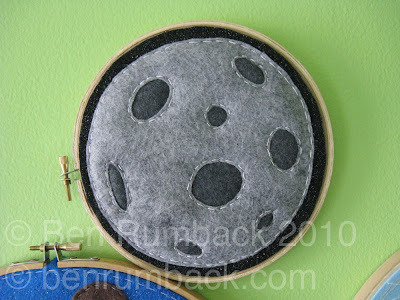 Oh, the indescribable feeling of loss, tension and relief that comes and goes and comes again the night of a show. The turn-out was great, and thank you all, deeply, for coming. I'm happy to say I sold three pieces saturday night. Foxy, Hoop the Moon and Bibliodile all left the store with smiling new owners, destined for a reverent spot on a beautiful wall in some caring home. *Sigh* Oh, the joy of sending one's young out into the world! Here are a few shots of the madness, courtesy of Heather, co-owner and proprietor of Green Genes, where the event was graciously hosted. 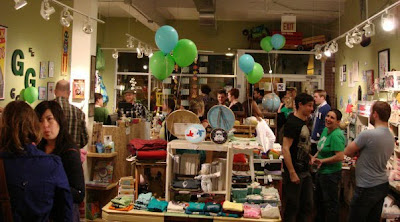 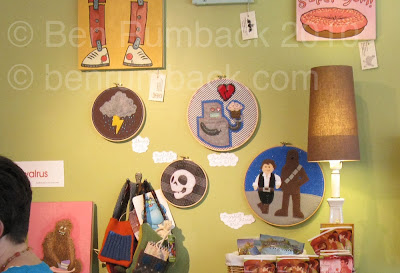 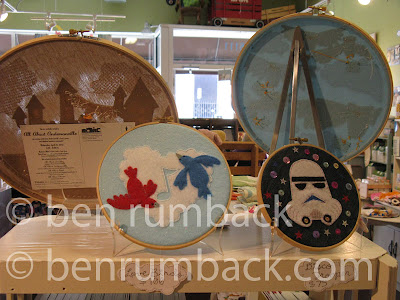 Here are some close-up shots of the work that I was holding back for the big party. First is 'Oh, Switch Off!', featuring the preeminent droids of the Holy Trilogy, and of that other kids' trilogy that we all paid to watch more than once. Measures about 9" in diameter. 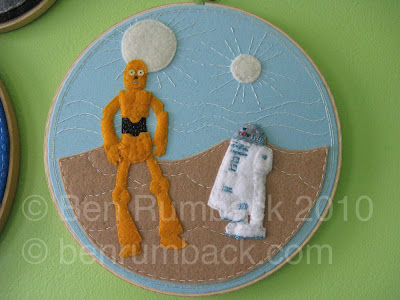 This little guy is 'Stormy Day,' and is self evident. About 7" wide. 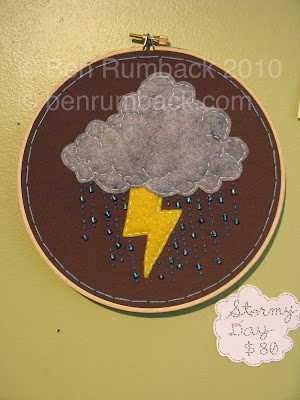 My new favorite, and my second Harry Potter inspired piece, 'Owl Post,' showcasing the faithful mail servants of the Rowling-verse. These guys gave me calluses! Look at the feather-work! That all happened the day of the show! ... Sorry, didn't mean to shout. Aren't they funny? 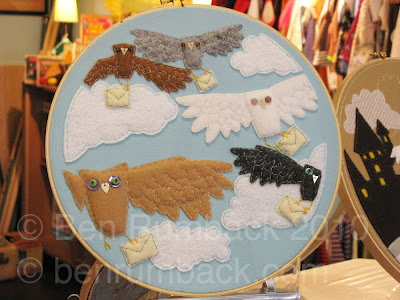 I may have typed too soon, calling 'Owl Post' my new favorite. The owls may be tied with this guy, and his sad but TRUE story, 'Forbidden Love.' Because, dammit, ROBOTS CAN'T EAT CUPCAKES! Thus, begging the question, is life without cupcakes a life worth living?! 8" 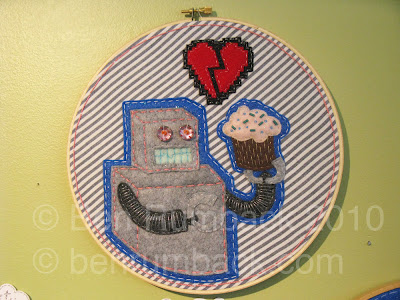 Ah, LOVE. If there was a theme to the show, I think it's be this. This one is called 'Blind Love.' After much tinkering, I figured the story best told here is a love based on something beyond looks. They're a couple of cutie-pies, eh? 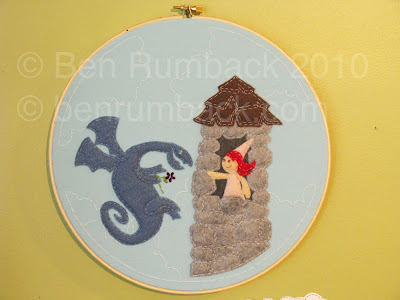 So, that's that, and it was super fun. All of the pieces featured here are still for sale, except for the moon, so give me a shout if your curious. Other pieces featured in the show can be seen below, including Foxy, Princess Sparkle, Love Birds, Dentalsaurus Rex and School of Stitchcraft.
Posted by benrum at 9:25 PM 2 comments:

Come one! Come all! At least one!

Howdy, friends and neighbors! That magical time has come again. It's the time in which I'm at my most productive, and most insane, and the time in which sleep is seen as a treat oft neglected, and taken mostly by accident, at the most inopportune of times! That's right, kids, it's SHOWTIME!
Saturday, April 10, in the year of the kitty, I'll be showing off (and hopefully selling a few) of my latest nerdlepoint pieces. I've titled the show EMBROID-USTRATIONS of a WILD IMAGINATION. 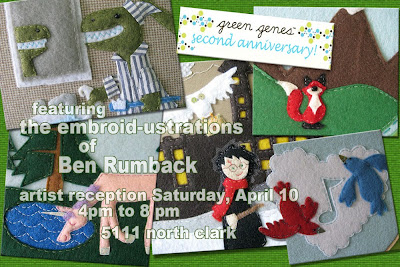 There is some degree of parallel here to my on-going collection of paintings, titled Heroes and Villains of a devoted Youth. I just love titling things, and I love the H&V title, but it didn't apply well to the subjects in my more recent work, as I never admired a Unicorn or a little fox. That is to say, I never saw them as 'heroic.' I suppose I do admire them, though.

At the risk of blogger redundancy, Here are larger, unaltered versions of the photos I used on the postcard above. There has been some confusion regarding shape of these pictures. All of the pieces for the show are in their original hoops, and their circular shapes are prettily preserved. 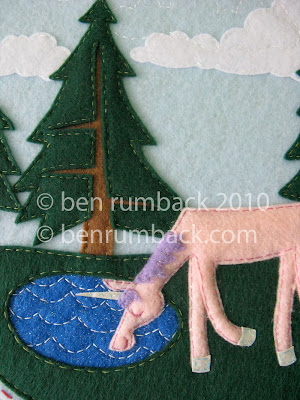 Any title ideas for the Unicorn piece should be transmitted in my direction. It's the only one I'm drawing a blank on! And I LOVE titling things. Amanda said, once, that one particular title was giving the artwork a run for its money. 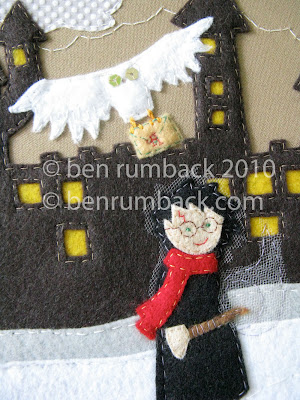 While I haven't got it QUITE right yet, this one will be close to School of Stitchcraft and Stitchery. Now that I type it, though, it seems repetitive. Sewery? Sounds too much like 'sewer.' That will need some more thought. 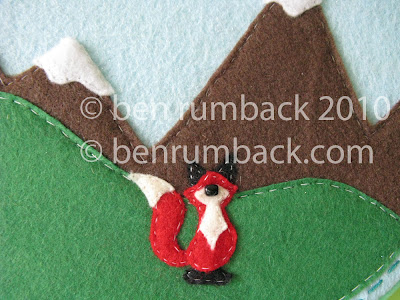 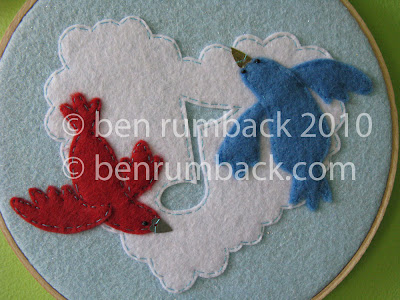 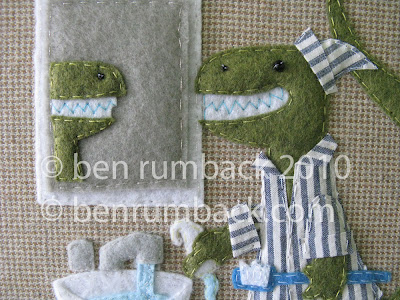 This one is almost right, titled DentalSaurus or something to that regard. I don't want it to reflect in any way, the idea of dental sores... and that's my only hang-up with it, currently. Finalizing the titles is on the top of my list of things to do today.

I think it was my pal Mary who pointed out the beauty and rarity of round wall hangings. So many right angles! These are rectilinear because that's the shape of my camera. Ooh... now I wonder if there is a camera out there that takes circular pictures. That... would be amazing.
Posted by benrum at 9:36 AM 1 comment: