Definition: Getting some money for making something wacky that you never EVER would have thought to make, if not for the money.
That's my latest understanding of the word, anyhow. Here are some wacky things that I never would have thought to make.
First up, Captain Alaska! I took the job via email from a group of friends in New England. Their friend (who the Captain is modeled after) just got his professorship, and they thought he could use a puppet. 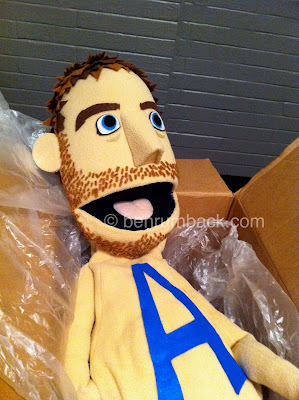 Apparently he is something of an environmentally-minded person, who jokingly goes by the alter-ego, Captain Alaska! Or was it Alaska Man? I can't quite remember. He makes a great puppet, though! 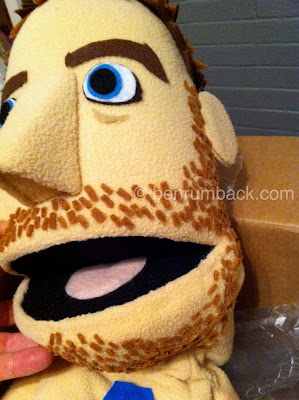 I tried something new with this guy. I had done a half-beard (or five-o-clock-shadow) before, and just stippled it on with Sharpie. I wanted to do something nicer, something tactile for this guy. The bits of felt took all afternoon to glue on, but the end result was totally worth it. 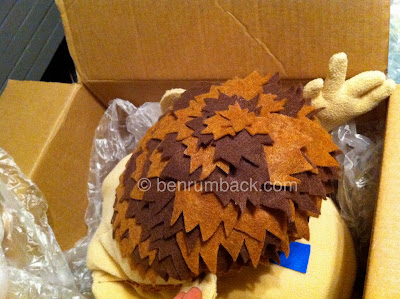 With the hair, I also wanted to try something new. I've been trying to move away from using faux fur for hair. It seems a little too common, and I like to think that my puppets have a signature style. I don't know what that signature might be, but I always try to give them that little something more, that extra inch of 'hand-made-ness.' I loved the hair on this guy. 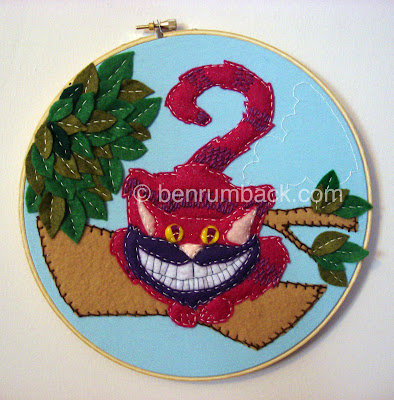 Next, we turn to my most returning client, Heather of Green Genes. She came back to me for another gift for her well-loved wife, business partner, and Wonderland obsessor, Tina. You may remember the Alice painting, the Looking Glass nesting dolls, or the cute-cute-cute family of peg people. Heather is a great business partner, a better friend, and my most frequent client. Always a pleasure! 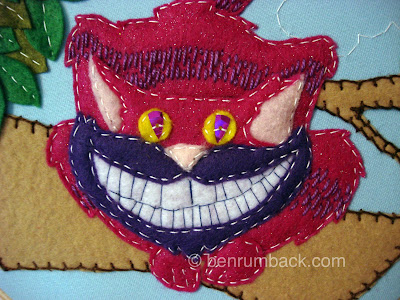 On a similarly different note, Heather and Tina employ one worker-bee at Green Genes, the magnificent Rachael! We became acquainted through my dealings in the store, and then she became great friends with both myself and Martha, my loving wife. Long story short, Rachael's sister got married, and she wanted to get them a weird something to commemorate their nuptials. 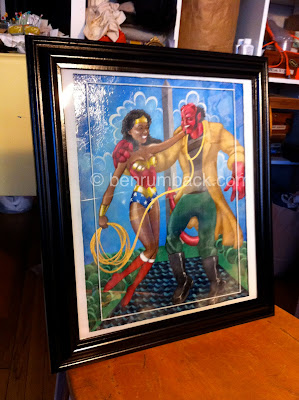 That, my friends, is the ULTIMATE wedding gift. The bride and groom floating over the reflecting pool in Washington DC, dressed as Wonder Woman and Hellboy. Nothing, I repeat, NOTHING says congrats like a superhero wedding portrait. 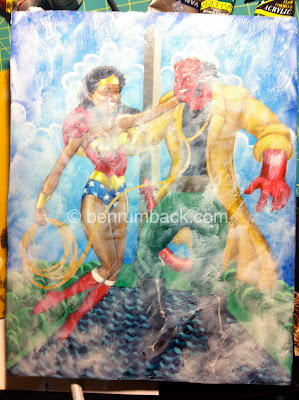 This shot shares the moment I completely RUINED the painting! In all the excitement of finishing the picture, I grabbed a wax medium instead of a heavy gel gloss. They have nearly identical labels (unless you can READ), and almost the same 'wet' look. One dries clear, though... the other, opaque, like bee's wax. Not ideal. I let it dry and, sweating, sanded off the wax with a rotary sander. And somehow managed not to ruin it! Hooray!
Posted by benrum at 9:26 AM 1 comment:

My dad, that is, is in the Navy. He's a part of the cleverly labeled Seabee's (Construction Brigade, C.B.). They've been around since WWII and have the particularly cool slogan, 'We Fight, We Build, Can Do!' I think it's cool, anyhow. My dad asked me to step in and design a logo for the annual gala event, the Seabee Ball. I did a tee-shirt design a few years ago, and was happy to help out again.
I recently learned that Walt 'The Man' Disney himself had designed a number of mascot and logos for the armed forces during WWII, and had a hand in the original Seabee design. I decided to go retro disney with the design, with a shout-out to Steamboat Willy in mind. 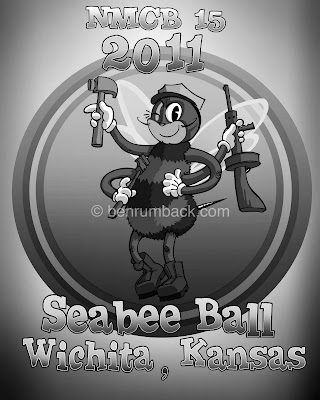 After the ball logo made the rounds and got approved, dad asked me to redesign the logo for his personal partition of the navy, NMCB 15. They call themselves the Bat Out Of Hell unit, and that too is a particularly cool title... so I agreed to draw something up. 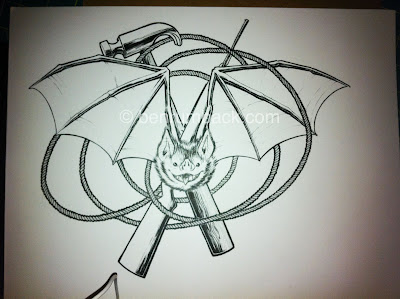 Like I mentioned, the Seabees are centered on construction and combat. The bee is famous for always having in hand a hammer, a wrench and a gun. I decided to stick to the same type of mood for the Bat piece, crossing a hammer and an M1 Garand (a shout out to the WWII origins) behind the bat. Then I added lots of rope. Every navy logo I could find has lots of rope behind it, I guess as a shout out to the days of sails and boat tethering... or whatever it's called when you tie down a boat. 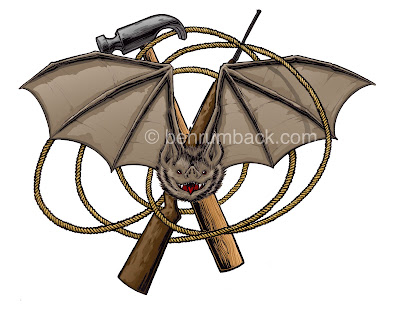 I scanned the ink drawing into photoshop, and BOOM! Colored the bat. And the other stuff. Looks sharp, no? But! This is supposed to be a bat... OUT OF HELL! This bat seems to be coming... out of a photography studio, or the matrix, or something very, very white. This bat, may even be, dare I say it, a bat out of HEAVEN! Scroll down for hellishness. 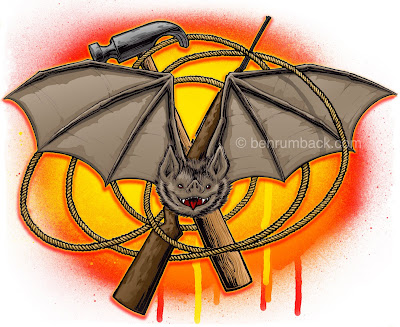 Yeah! Now THAT is a bat out of hell! Mwa-ha-ha! Thanks to Spoon Graphics for the free spray-paint photoshop brushes! Those guys do good work.
That's it for me and my government work. To be clear, I'm still a pacifist and don't support war... I just draw stuff for my dad. And I do it for free. Don't judge me!
-Ben
Posted by benrum at 8:41 AM 1 comment: